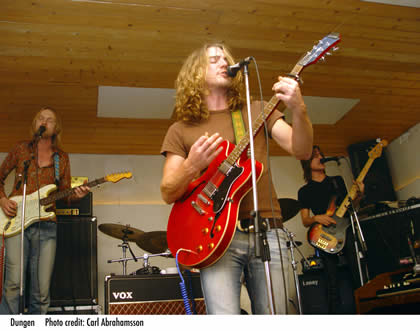 Dungen, performing in a wooden box

On record Dungen are one-man and Scandinavian and psychedelic. 25-year-old Swede Gustav Ejstes played all instruments and recorded all tracks for the gorgeous Ta Det Lugnt LP, his third record that somehow bears no sign of its recent vintage. If you mistook the record’s 60s anthemic fuzz rock numbers for, in fact, actual 60s anthemic fuzz rock numbers, you wouldn’t be the first.

Ta Det Lugnt bit buzz hounds so hard last summer that Ejstes scored live dates in the states, including a spot at the Vice 10th Anniversary party, a recent acoustic show in the Living Room, a full-out summer 2K5 tour with a full band and stagetime at the Siren Festival, and even a US label and distribution deal with Kemado Records, who plan to re-release Ta Det Lugnt stateside August 2.

I’ve seen you once with a full band and once for an acoustic set you played just with your girlfriend. Will she be playing with you on this summer tour?

No, she’s not coming this time.

Did you kick her out of the band?

She is not part of the band.

A lot of people hear your record and think you are an old guy from England, whereas you are a young guy not from England.

I think there are– what I think is that Americans are surprised that they do like something that is performed in a different language. And I think many are– a lot of people think we are retro, like hippies, and we are young people that like to play.

Do you take more from British and American Rock, or more European stuff?

There are bands from all over the world that were a part of that era, I think. But of course there was a lot of acts from Britain and the U.S. But of course I have a lot of countries. No country.

What are you listening to now?

I just had a little period of hip-hop records. Like from New York and parts of the early 90s. But of course my all-time favorites are always Black Sabbath, and of course I listen to a lot of Swedish folk. It is something that I love very much.

Is there a Swedish hip-hop scene?

Yes, they are quite good actually. Swedish hip-hop is actually amazing. I don’t think you’ve heard of anything.

Why don’t you tell me a few.

One of the best Swedish hip-hop acts is a guy named ADL.

I have never heard of him. Have you thought of putting out any hip-hop records?

The thing is that I don’t do that. I just leave that for other people to do it. Because they are people that are into that more than I.

Do you know any of the other bands that are playing Siren?

I’m going to tell you the name of the band, and I want you to guess what they sound like based on their name. Spoon?

That could be everything from punk-rock to dancehall, I don’t know.

No, I was just saying OK. What do you think of Brendan Benson.

You got every one right. Last question. Because nobody knows Swedish, you can potentially say anything you want at a concert, and nobody will know what you are going to say. Will you say something about people?

I will never say something about people.