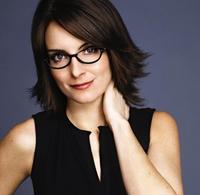 Last night, I had a dream about you. We were walking along the beach. The wind was blowing in my hair. You were eating shucked corn.

I spoke. I told you how I really wanted things to happen for you with 30 Rock. Not just because every sitcom has been replaced by a reality show, although how many times can Bill-age-32-from-Idaho eat rat eggs and I fear Flava of Screech. Truth is, I can’t look at Leah Remini on King of Queens anymore. Or Patricia Heaton on Everybody Loves Raymond. Or any other show where attractive women are the nagging ball and chains to some pud who eats his own boogers.

But I wonder Tina…will 30 Rock last? Some good one-liners here and there, Tracy Morgan making the most of it…but I sense a faltering, a losing of grip. In the battle with Studio 60 it’s clear who the victor is, but that’s only because Aaron Sorkin’s a poozer who makes his actors sound like they’re planning nuclear holocaust whenever they drop by Home Depot for lighting fixtures. (Here’s Mr. Sepinwall, stating it so much more eloquently than I.)

I think your career is in movies. The Lohan vagina must talk. Think about it.

Your pal,
Eye of the Potato