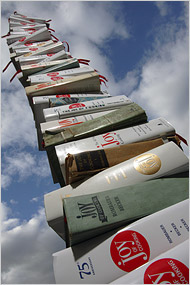 Admittedly, that headline is a tad whore-ish. Kim Severson reviews the 75th Anniversary edition of The Joy of Cooking today in the Times. And she does end up admitting that “the new version is the most complete and current ‘Joy’ you can buy” if you aren’t already attached to one of the other editions. She says that the choice of whether to use the 1975 edition
(her favorite) or the 1997 (too chef-y and impersonal for her taste) or the new one (which strains to bring back the quaintness of the Rombauer-Beckers) is a personal one.

To its credit, Severson says the section on grains has been improved, as has the venison information and the “Know Your Ingredients” reference section. After all, as Severson says, “Joy’s” best use is as an all-purpose kitchen reference.

But she delivers a few burns along the way: