Put this on your blogroll: a salad of Dada and psychedelia with sperm dressing 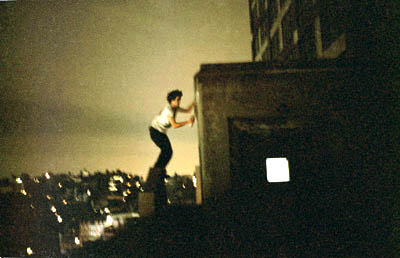 In this week’s New York Magazine, there’s a 6500-plus-words profile about elusive ex-graf-writer-cum-come-artist Dash Snow. Snow is also a founding member of the semi-legendary Irak crew, a close-knit group of NY “derels” (that’s derelicts to you) that included Whitney-featured photographer Ryan McGinley, artist Dan Colen, and Ace Boon Kunle (tag name= Earsnot). In the last nine years, IRAK has become known not only for obsessively bombing downtown and the kind of deftly successful kleptomania that’d make Winona Ryder jealous, but also for getting more creatively fucked-up than Pete Doherty. For example:

“Colen and Snow went to London together this fall for the Saatchi show in which they both had work. (Saatchi had bought one of Colen’s sculptures for $500,000.) Saatchi got them a fancy hotel room on Piccadilly. They had to flee it in the middle of the night with their suitcases before it was discovered that they’d created one of their Hamster’s Nests, which they’ve done quite a few times before. To make a Hamster’s Nest, Snow and Colen shred up 30 to 50 phone books, yank around all the blankets and drapes, turn on the taps, take off their clothes, and do drugs—mushrooms, coke, ecstasy—until they feel like hamsters.”

Top five other things about the piece:

1. Rawer than bombing trains: “Snow and Irak crew were always pissing people off. They used to pay bums to let them tag their backs.”

2. This sentence: “Snow’s work, for instance, is regularly trashed for being slapdash: a salad of Dada and psychedelia with sperm dressing.”

3. In 2005, the New York Times did a piece about another Irak crew-member Simon Curtis and an arrest that involved Ryan McGinley by association, there’s a parenthetical aside about Snow’s alleged attempt at sobriety: “Dash Snow, who is 23, said he suffered complete liver failure last year and had stopped drinking and tagging because ‘I’m not trying to go to jail.'” In Levy’s profile, Snow comes off like he’s never even considered sobriety.

4. While Levy enumerates various reasons to hate them (“You could hate all three of them for being so enamored with penises and what comes out of them”), one of them isn’t that they’re Vice Magazine pukes. And at least McGinley is. Not only has McGinley shot for Vice, but that aforementioned New York Times piece quotes Vice-co-founder Gavin McInnes as having once written: “Hanging out with Ryan you feel like you’re part of an infamous moment, Like it’s going to end up in our generation’s version of Please Kill Me. Even when you’re puking or getting swastikas drawn on your passed out face you’re thinking, ‘I’m making history.’ ”

5. The twist is that Snow is a descendant of art-world “royalty.” Then about halfway through the profile, Snow gets mad at author Ariel Levy for calling his rich granny. He gets mad at calling his rich granny? We have to imagine he’s even more pissed now, considering the post-piece hate for author Ariel Levy spilled in the comments section of the Irak NY blog. Perhaps the most messed-up comment there: “[sic] Id like to Hamster’s nest her pooper hole.”