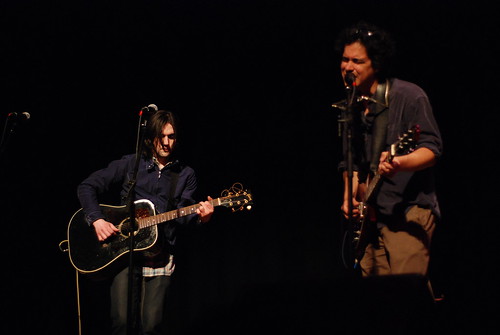 Yeah, that’s who you think it is on the left.
Photo by Tammy Lo. More of her photos from Town Hall here.

His heart is always on the line, he’s traveled all kinds of places, and the concierges all meet him with a frown. M.—Matt, if you’re nasty—Ward has done this all before, so have we, and he wants us to know that we’re not particularly special. So last Friday at a sold-out Town Hall, Ward’s third serenade was Transistor Radio‘s “Paul’s Song.” That particular tune has the refrain, “Every town is all the same,” a NY-Missoula-whatever line prefaced by the tough-love rationale, “I ain’t gonna lie to you.” Sorry, Em, I call bullshit.

Case in point: the encore. Yes, indieink, that’s who you think it is up there in the photo. Ward’s friend and frequent collaborator, the Big O from the Big O. The Great Plains kid who left home, made a deal with the devils of fame, and convinced Emmylou Harris to join him on his personal path to Hell. Destiny is calling him. . . ’cause he’s Mr. Bright Eyes. So Em, if every town is all the same, why isn’t Conor Oberst making guest appearances in Greybull, Wyoming?

Because this is New York. And not only did we get Oberst, we got two members of the Brooklyn-based Oakley Hall, Ward’s brand-new label-mates Rachel Cox and Patrick Sullivan, who helped out on “Magic Trick.” Oberst alone bounced out for the very last song, the first part of End of Amnesia‘s two-part finale, “O’Brien/O’Brien’s Nocturne.” Oberst’s host didn’t bother with introductions, just let the Saddle Creek man-boy pick up a guitar and sing while the rest of us indie-folk-emo-cheese suckers grinned. When the duo finished their story about O’Brien, Ward identified this other OB, who then skipped off stage. The end.

The beginning? Portastatic, the post-Superchunk project from Ward’s label boss, Mac McCaughan. (When McCaughan thanked Ward for having his band open, a graying man in front of me actually guffawed, “What label is he on?”) This wasn’t the Portastatic we expected, this was the stripped-down guitar-and-violin duo of McCaughan and bow-rubbing Cat Power/Belle-and-Sebastian collaborator Margaret White. But as McCaughan noted in his Portastatic blog (full set-list there too), the duo got a “polite reception,” which basically means anybody who cares likes the real Portastatic better.

Then there was capital M. On this past fall’s Post-War tour, Ward dragged along a full band, complete with two drummers. (Initially, the two percussionists shtick scared me gratefully dead, but it really was awesome live.) This time, the show was mostly Ward alone. A guy alone with a couple instruments on an otherwise empty stage doesn’t easily keep your attention for a full 90 minutes—sometimes even Jonathan Richman has a hard time pulling it off. But between Ward’s serious intensity and his breathy voice of hickory-smoked goodness, he really can be something of a mind-blower. The Steinway-&-Sons-accompanied cover of Daniel Johnston’s “Story of an Artist” made people laugh. “Sad, Sad Song” made me want to thumb through the Yellow Pages looking for love advice from unusual sages (whippoorwills, killer whales, M. Ward’s mama). And “Fuel for Fire” definitely made a few people want to fill lonely nights with a harmonica—when Ward sucked on that thing, well. . . at one point, some salivating fool actually yelled, “You are a handsome man!” Benicio del Toro with cheeks, anybody?

CRITIC’S NOTEBOOK
Previous experience: Remis Auditorium in March 2005; the Newport Folk Festival with Conor Oberst and Jim James, August 2005; Somerville Theatre, September 2006.
Personal bias: Gave my extra ticket to someone I met in the comments section of Brooklyn Vegan. He looked like Chris Parnell and fell asleep during the show. This probably affected my experience. Plus, I ripped my jeans on a Town Hall seat.
Random detail: A clump of hair fell down from the balcony and onto the girl in front of me. She didn’t notice. I didn’t tell her.

Normally, live reviews will go up the following weekday. But Lionel Richie circa 1980 was so dope that we had to let him shine for at least 24 hours. You understand.