Of Mice and Councilmen 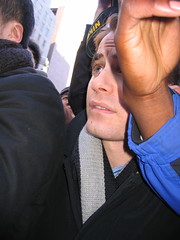 Amazingly, the most extraordinary moment of Sunday’s protest in front of CW11’s studios was not when the always perfectly coiffed and normally affable Councilman John Liu went off-script and started screaming profanity at the calmly blinking face of reporter Chris Glorioso (at left). Rather, it was about 30 seconds after that, when CW11 cameraman Kenton Young, realizing that the fourth wall of press conference theatrics had been irreversibly bulldozed, swiveled his massive camera 180 degrees and turned his station’s own questioner into the questioned.

Until that moment, the roughly 200 chanting and sign-waving Asian Americans—gathered in front of the station’s midtown offices to demand an apology for last Monday night’s news about a mouse found in an order of chicken and broccoli Chinese take-out from New Food King on Rockaway Parkway—had been directing their ire at the building where they felt the irresponsible news decisions had been made. Suddenly, with the refocusing of the camera’s gaze, they were yelling at Glorioso.

“Liar! Liar! Liar!” they chanted at the 29-year-old television reporter who had filed both the original story from the Canarsie restaurant and the follow-up two days later with a biologist who confirmed the mystery meat as “a dead rodent.”

The diminutive Glorioso, barely visible in the crush of police-penned bodies, furrowed his brows over his green-tinted contact lenses and kept pummeling the demonstration speakers with the questions.

“But, but, you haven’t answered my question . . ” were his last discernable words before the roar of the crowd took over.

So much anger could not, obviously, be fomented in a single week. The protesters saw the mouse’n’broccoli report as the latest in a string of unfounded ethnic slurs from the station.

“This is not the first time that CW11 has engaged in this kind of story,” Liu said. “Five years ago, they did a ridiculous story about a Korean restaurant serving dog meat. People are still very upset.”

The station did indeed run a story about a Korean restaurant selling dog meat in 2001, and apologized two years later in exchange for the restaurant owners dropping their lawsuit. But the joint statement from the Tribune-owned station, the reporter on the story, and the restaurateurs did not retract any inference that any kind of dog meat was sold, only domesticated canine meat. The meat came from a wild coyote, according to the statement.

History appears to be repeating itself, as attorney John Yong announced yesterday that he was planning to sue the station on behalf of the restaurant for the lost business and “40 racist telephone calls” that it has gotten since the first story aired.

The scandal started when a patron of the restaurant called CW11 on Monday, January 29, claiming to have gotten a fried mouse in her take-out, according to Glorioso, who has been acting as the station’s spokesman on the matter. He said he received the assignment upon getting to work at 3 p.m., and was out inspecting the grisly morsel at the woman’s house by 5 p.m. He then went over to the restaurant to confront the cook, who maintained the meat was just a mouse-shaped piece of chicken.

Glorioso said he picked up the meat in a plastic-gloved hand and showed it to “at least a dozen people” standing around the restaurant who agreed that it looked awfully rodent-like.

“Confirmation wasn’t the issue,” he said. “This was a mouse.”

Nevertheless, he said his assignment desk did make a few attempts to get a laboratory back up to the woman’s claim—including calling the city’s health department—before News at Ten’s deadline, but no lab was open at that hour. He said there wasn’t a great deal of debate about what the right thing to do was, and stressed how guilty he would feel if someone got sick eating at the restaurant—which had been cited for “evidence of mice” three times in the past three years—while the station waited to get a second opinion.

“When you are a reporter, your most important tool is your common sense,” he said. “You can’t just put that aside.”

But just what constituted “common sense”—and indeed, knowledge itself—was the subject of the screaming match during Sunday’s icy protest. Liu considered it unforgivable that the station would have run the original story without getting laboratory confirmation first. But he stepped into a debater’s trap when he said, “The reality is, all you needed to do was stick a fork in that piece of chicken to determine there was no hair, there was no skin, there were no bones,” since this implied that regular folk, not just trained biologists, are capable of figuring out what kind of animal was fried beyond recognition in the oil vats that day.

Liu and the restaurant’s lawyers are disputing the biologist’s report, claiming it was “rife with spelling errors” and that the station did not follow proper forensic procedure in the chain of handling the evidence.

Evidence aside, the real crime in Liu’s mind was the little quip about “fried mice”—a play on fried rice—in the introduction to the original piece, which he said made the whole segment racist.

“We’re not here to protest sensationalism,” he said. “We understand that TV stations have to boost their ratings. But when you air this kind of erroneous, unsubstantiated accusation, and in the process broad-brush an entire community, that is wrong and we demand an apology from CW11.”

The station’s refused to give one, instead issuing a statement Sunday that “given the facts of the story, and the subsequent confirmation of these facts by a reputable laboratory, CW11 stands behind the story.” The station also got the last laugh during its newscast that night when it broadcast Liu on camera screaming at its reporter (“Don’t cover your (bleep)!” the pink-faced councilman bellowed. “It’s a false report!”)

The clip might have served as an answer to Glorioso’s own rhetorical question, when asked how it felt to face down a crowd screaming that he was a liar.
“Why do people have this view of journalists?” he said. “You feel a little disappointed that people might see the worst in your profession, even when you tried to damn hard to get it right.”

This article from the Village Voice Archive was posted on February 5, 2007