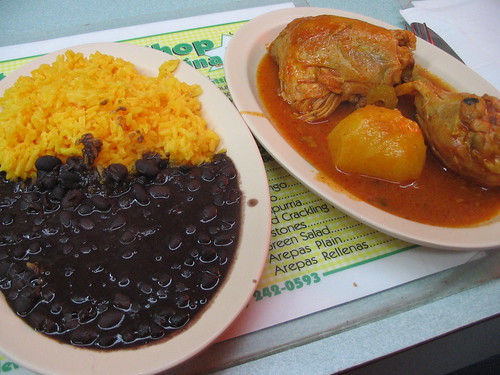 Chicken stew and rice and beans at Sucelt Coffee Shop

Yes, that is quite a claim, but I firmly believe that without the Cuban/Dominican lunch counters of this fair city, my already severe case of seasonal affective disorder could turn deadly.

Braising and slow-roasting my own hunks of pork, beef, and lamb is a great joy during the dark months, but sometimes you need to be taken care of by someone else. And preferably, on the cheap. Otherwise, how comforting is comfort food, really?

I have never understood why every braise-friendly cuisine has not developed similar eateries: These holes-in-the-wall celebrate food that actually benefits—or at least doesn’t suffer—from sitting in steam tray all day.

I recently took myself on a small tour of some beloved spots for “comida Latina,” and I feel better, and chubbier already.

La Conquista, on Lafayette, though not particularly camera-friendly (I was reprimanded angrily and banished to the street, but it was worth it), serves the best beef stew I have eaten in recent memory.
La Conquista
236 Lafayette Street
at Spring
(212) 226-9835

In Harlem, the competition is huge, as are the restaurants. Malecon Restaurant, on Broadway, works rotisserie magic, and turns out mofongo that, once slathered in the accompanying sauce of pork drippings, beats any SAD lightbulb out there.
Malecon Restaurant
4141 Broadway
at 175th Street
(212) 927-3812

In Chelsea, a few Cuban joints are holding on for dear life, and Milanes Restaurant, which specializes in Dominican homecooking, like the soup Sancocho. Their chicken soup is nothing to scoff at either. The rice has cooked so long that the grains seem to have unraveled into a new kind of noodle.

This article from the Village Voice Archive was posted on February 9, 2007