Live: Girl Talk Gets Hit With More Ass Than A Toilet Seat 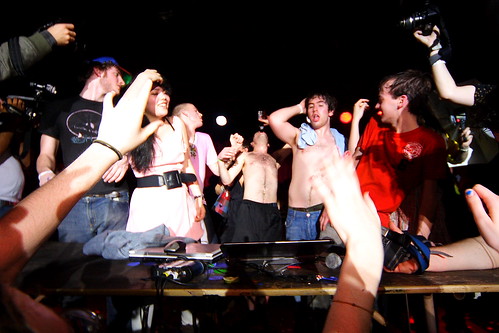 Last Friday, Greg Gillis had to pee—desperately enough that he asked a sold-out Studio B to “hang on” a sec while he took a leak. First time I’ve ever seen a performer postpone a show to hit the john. Then again, it was a lot of firsts: first time I’ve seen a laptop jockey make an entire club detonate into sweaty, colliding parts in less than 60 seconds (no joke); first time I didn’t want to punch James Van Der Beek’s beek upon hearing a few bars of Paula Cole’s “I Don’t Want to Wait”; first time I’ve ever witnessed a biomedical engineer get (rubbed with) more ass than a toilet seat.

Haters, you lose on this one. Yes, Girl Talk—Gillis’s nom de DJ—is a slim Pittsburgh resident with a pencil-thin bellystache and an affinity for headbands. His instrument is an action-packed laptop full of recognizable samples, which makes it easy to dismiss him as another mash-up dork with some neat software. But screw the tools: assembling disparate pieces is its own special metier—last I heard, it’s called curating. And Girl Talk’s real artistry is what he manages to create—through hype or populism or timing or impeccable taste—once he pulls out his magic machine and starts clicking: total insanity.

Gillis came back from his bathroom break in a gray hoodie and Cavaliers cap, started off with a version of “Once Again,” the opening track on Night Ripper. Ten minutes later—after a Jackson 5 vocal loop, snippets of Clipse’s “Wamp Wamp (What It Do),” and some deathly beat-acceleration—the stage looked like a jungle gym. Girls stood on his laptop table and shook their rear-ends at Gillis’s head. People wore each others hats. Bouncers pulled kids from the ceiling. Gillis kept getting butted. Then the air sirens came. And Girl Talk shouted, “Brooklyn, everybody, we need to move together, everyone!”

Brooklyn moved together. Bits of Snap’s “The Power” spilling into Digital Underground’s “Humpty Dance” and back. Was that a stripped beat from “Another One Bites the Dust” segued into a splice of “When Doves Cry”? No matter. Even when the audience would go batshit crazy at a 30-second clip—whether it be Kelis’s “Bossy” or Daft Punk’s “Around the World” or Rick Ross’s “Hustlin'”—each one ended before we could get too comfortable. Gillis, nice guy, kept checking on us. “You guys alright? You still with me?” We were.

Somehow, then, it was nearly two in the morning. Girl Talk was shirtless and wet. The rest of us were soap-opera breathless. Then when Paula Cole whined, “I don’t want to wait” and a roomful of culturally snobby kids realized they were swaying to the fucking Dawson Creek song, the argument over creation-versus-appropriation became irrelevant. This man was an artist! Hell, this man was an hypnotist! He built us up and broke us down! He made us sway to Paula Cole!

CRITIC’S NOTEBOOK
Previous experience: Night Ripper. Massive Internet hype and crazy Flickr sets. Status Ain’t Hood review from last August. Seeing Paula Cole perform at the Boston Music Awards and hating every second.
Personal bias: My notes are beer-splotched and nearly indecipherable. It was a really, really fun show.
Overheard in line outside: “You’re not really cool if you don’t have a warrant out for your arrest.”

This article from the Village Voice Archive was posted on February 12, 2007