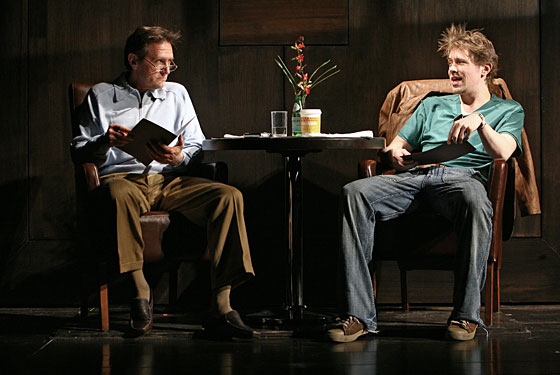 This week in the Village Voice’s theater section:

Michael Feingold doesn’t think Alan Ball’s All That I Will Ever Be is really all that. Though he does praise Ball’s ambition and honesty. He finds White Horse Theater’s revival of Williams’s In The Bar of a Tokyo Hotel, a less than quality inn, though he does draw attention to the script’s worth.

I found The Spanish Play a sad mistranslation of my Sunday afternoon, not caring terribly for either Yasmina Reza’s script or John Turturro’s direction. Apparently the other night Turturro stepped in for an ailing Zoe Caldwell. That I would have liked to see. What does it mean that in one week both Michael and I had need of the term “faint praise”?

I didn’t need any blush while attending At Least It’s Pink, Bridget Everett’s raunchy one-woman musical, written in collaboration with Michael Patrick King and Kenny Mellman. Perhaps we can convince Ms. Everett and Mr. Mellman to grace our blog to the links to their cheeky little number “Canhole.”

In the Sightlines section, Eliza Bent dipped her toes into Mme. Bonnnard’s Bath, John Beers finds Absolute Clarity less than crystalline, and Andy Propst, almost lone among critics was converted to The Jew of Malta.