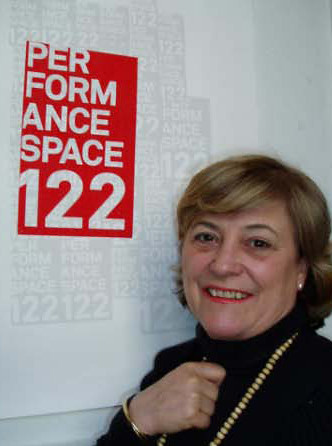 Welcome to the first in a series of interviews with the judges of the 52nd annual OBIE Awards. Our first is with the lovely Anne Dennin, Executive Director of P.S.122.

How did You become involved with the theater: My first Broadway show, The Prime of Miss Jean Brody with Zoe Caldwell made me want to move to New York to go to the theater. After I got here TDF was useful in helping me to finance my theater going habit. I began working in the theater as a producer of the Jim Henson International Puppet Festival in 1992.

What do you think makes a piece of theater extraordinary:
The theater pieces I have like best are often the ones that I enjoy least while in the theater. They make me uncomfortable or I feel I just don’t get it; then I find myself thinking about them for a long time after I’ve seen them.

What are some plays or performance pieces from the past several years that have remained with you, that are favorites:
Eric Bogosian’s Talk Radio at the Public Theater in 1988 (I’m looking forward to its return to Broadway), Thom Pain (based on nothing), Sinner by Stan Won’t Dance at P.S. 122 last year.