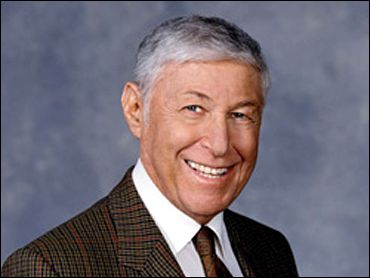 Don Hewitt has an idea for a show.

That’s right, the 84-year-old creator of 60 Minutes, who was put out to a spacious and Emmy-filled version of pasture three years ago directly beneath the CBS offices where he once routinely made television history, is plotting his next news magazine. Only this time, it’s going to be online, created for and by young people sounding off about whatever is in their young brains. Sort of like, you know, that other thing.

Hewitt envisions the news magazine, a collection of video op-eds tentatively titled Sound Off, as a way to meet the youngsters (and the advertisers that follow them) on their own virtual turf.

“I know that this is an age group that does not watch television,” Hewitt said. “They are not interested. I figure that’s because they are bent over a computer all the time. I figure, maybe the way to reach them is the Internet.”

Hewitt pitched his idea to a group of film students at NYU yesterday in hopes that some of them would submit one- to three-minute videos for the pilot. He’s looking for stories about “whatever you think is important in the world, or are mad as hell about, or are moved or amused by,” according to a recruiting email sent yesterday.

And although the technical requirements for submission are low-budget—even cell phone camera footage is OK, so long as the sound is clean—the storytelling vision is pure Hewitt.

“If you’re interviewing others, make sure they are interesting,” reads the email. “Strong characters can save a weak story. Weak characters can sink the strongest of stories. Cast your story with people whose personas make you pay attention. . . . people who are forceful, animated, quirky, whatever . . . you’ll know it when you see it.”

So can the news sense once applied to the thrilling lives of Frank Sinatra and Lena Horne make magic out of dorm politics? More importantly, can this kind of thing make money? For a man used to dealing with big-league production budgets, the whole enterprise sounds downright DIY.

“We don’t need backers,” Hewitt said. “If we get it going, and they start contributing, we can put it on Yahoo or Google or somewhere.”

This sort of talk is sure to thrill his former boss and fellow octogenarian Sumner Redstone, chairman of the board and controlling shareholder of both CBS and Viacom. Redstone has been on a rampage against Google-owned YouTube in recent weeks, slashing Viacom content from the video portal.

Hewitt is launching the still-amorphous venture, under the name The Hewitt Group, with his son, Steven Hewitt, former president of Hallmark Entertainment and executive producer at Showtime, and documentarian Harry Moses, who has produced scores of stories for 60 Minutes. The three men worked together most recently on Moses’s “Who the &#%& is Jackson Pollock?” a documentary about a former truck driver with an eighth grade education who buys a Pollock for $5.

Hewitt says the partners are “still groping around to see what the students come up with,” but hopes the online news magazine could be profitable someday by receiving some of the advertisers now fleeing television.

“One of these days, I hope it would become the student counterpart to what 60 Minutes was to adults,” he said.

Nicholas Lemann, dean of Columbia University Graduate School of Journalism, said he was happy to let Hewitt recruit journalism students next week. “There are many many, many journalistic web-based startups,” he said. “Don has an unbelievable track record. I think it’s an interesting idea and I wish him luck.”

In the meantime, the father of the longest-running news magazine in the history of television has other projects on his plate. One is very secret, he said. The other is a documentary about Shanghai in anticipation of the Olympics.

“I want to die at my desk,” Hewitt said. “I don’t want to die in a rowboat or on the golf course.”

This article from the Village Voice Archive was posted on February 22, 2007