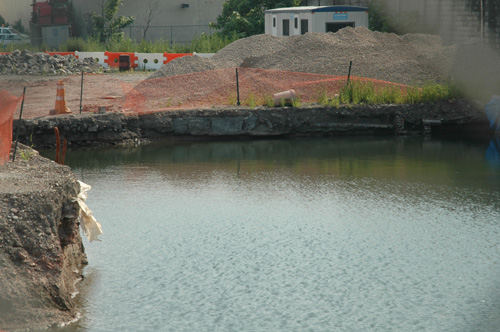 I recycle and use those special light-bulbs, but I also take long showers and run the air conditioning non-stop all summer. Very un-hip. The pressure to be green is enough to make a girl’s head spin right off into her canvas shopping bag. And the same goes for the corporate crunchies.

The Brooklyn Record reported that 500 Park Slopers have signed a petition to urge the forthcoming Gowanus Whole Foods to keep things green. Here’s an excerpt:

Since only about 40% of households in this area own cars, we’d like to work with Whole Foods to de-emphasize vehicle traffic in favor of other modes of transportation to and from the store. We also think Brooklyn deserves environmentally friendly measures like green or solar roofs, which Whole Foods has implemented or planned for in other markets.

But things get greener. Curbed, those clever bastards, has picked up on some chatter on a Yahoo investment/stock message board and reports that Wild Oats may be opening 15 stores around these parts within a year. Wild Oats and Whole Foods have just announced a merger (read: Whole Foods bought Wild Oats.) Read the letter from Wild Oats, and get to know your next natural market?

This article from the Village Voice Archive was posted on February 23, 2007