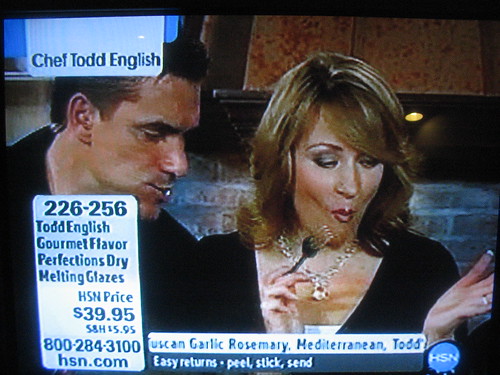 Swear to God, I don’t make a habit of watching the Home Shopping Network. I was just flipping through the DVR guide the other night when Todd English’s name jumped out at me. The chef, whose eyes and mouth move imperceptively when he speaks, was hawking the obligatory set of pots and pans (his are all rounded, which I imagine would make for a crowded stovetop, if you’re stove is anything like mine.)

But aside from the ubiquitous built-in pasta strainer and the square grill pan, he also had a magic trick that I simply could not flip away from, to the dismay of others in the room. It’s Item 226-256, Todd English Gourmet Flavor Perfections Dry Melting Glazes, and it’s the only thing that has sold out, according to the HSN website.

Basically, these all-natural powders, when tossed with hot food, melt into a glaze, which requires no additional seasoning. Magic. (Flavors: Bonfire Barbeque, Tuscan Garlic Rosemary, Mediterranean, Todd’s Teriyaki, and Pesto Genovese. Not that you can buy them or anything.)

English teamed up with the Swiss company, Givaudan Flavors, one of the world’s leading “flavors and fragrances” producers, to create the gourmet fairy dust. As the chef explained, when he could get a word in over the squawking HSN saleslady, the scientists came to his restaurant, Olives, and captured the aromas of his food, then somehow recreated the flavors in magical melting flavor crystal form. This is as technical as our understanding can get. Sorry. But isn’t that cool/scary?

This article from the Village Voice Archive was posted on February 26, 2007