American Apparel Sez We Are Not the Splasher(s)!

To brief all you super-duper latecomers, a quick primer on the “Splasher”: there’s an anonymous bandit (who may or may not be an entire crew of art-school drop-outs) skulking around New York City and Brooklyn at night, throwing buckets of paint on street-art pieces that’ve been running for a while (Shepard Fairey, Swoon, and a Banksy have been hit), and wheatpasting up these mumbo-jumbo one-sheets about how street “art is the excrement of action.” Biggest irony-that’s-so-obvious-it’s-not-even-ironic? Between the Times, the Guardian UK, and Wired Online, the “Splasher” has been the biggest street-art development in months since 11 Spring Street, yet one of the points seems to be destroying the hype surrounding it.

But newsflash: Mr/Miss “Splasher” has actually been active since before 11 Spring. Flickr user Niznoz photographed one of those manifestos as far back as November; and if you look closely at the photo accompanying a piece about 11 Spring Street that appeared in the Times last December (right under your noses, NYT!), the then-unnamed “Splasher” had tossed white paint and pasted two manifestos on the snow-globe painted on the left. So my dear Masters of the Obvious, give an anonymous art-dick(s) a comic-book-villain name and the front page of the Metro section = the more he/she/it plays the role of the villain!

The Splasher’s actually kind of a genius.

There’ve been a few whispers about the identity of this high-profile figure, but probably the most interesting (and publicly documented) theory that rippled around was yesterday’s suggestion that the Splasher was an American Apparel guerrilla-marketing campaign gone extremely well. 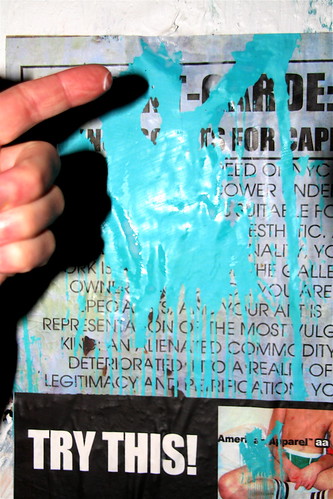 Since we’ve already been known to deconstruct the Splasher‘s actions, here’s our theory. The Splasher doesn’t splash his own thesaurus-laden jibberjabber, he/she/it splashes street art, so somebody in Billyburg is now splashing the Splasher.

As for the American Apparel ad? We’re guessing the Splashing-the-Splasher’s message is something like this: Splasher, you are as street as naked hipsters in kneesocks!

Which brings us to another point: Vans, you wanna offer the Splasher a shoe deal? Y’know, if we had PhotoShop on this machine (hint, Mr. Bossman), we’d use our limited skillz to mock up a design right now: paint splashes on the slip-on toe, windy glass-shard screeds on the heel. Seriously, Vans, can you track the Splasher down so we can all just throw down our guns and admit that everybody’s essentially a shill?