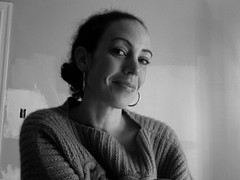 We continue in our valiant and wholly enjoyable efforts to bring you excerpts of unproduced plays by favorite playwrights. This week we feature the charming Ann Marie Healy. Ms Healy’s plays have been produced and developed in the EST Marathon of One-Acts, The Cape Cod Theater Project, Soho Rep, LAByrinth Summer Intensive and Clubbed Thumb. NOW THAT’S WHAT I CALL A STORM was produced in 2004 by Edge Theater (directed by Carolyn Cantor). Ann Marie was recently awarded a 2006/07 Sloan Commission and a 2006 NYSCA commissioning grant through Clubbed Thumb. She is currently studying with Paula Vogel at Brown University.

After the jump, an excerpt from HAVE YOU SEEN STEVE STEVEN, which will receive a production in September 2007. According to Ms. Healy, “HAVE YOU SEEN STEVE STEVEN explores issues of anomie and denial in the world of a Midwestern suburban housing development. Kathleen, theprotagonist, must negotiate demands of the adult world with her feelings of dread about growing up. What begins as a fairy tale about the passage into adulthood turns into an apocalyptic nightmare eroding the core set of beliefs that make up our contemporary American society.”

(The sound of a phone ringing harshly. Kathleen picks up the landline.)

(The line goes dead. Kathleen stares at the phone in her hands.)

JANE: (She turns to Kathleen with a friendly focus.) So. What are you up to these days Kathy?

JANE: But you’re going to…

JANE: (She starts laughing aggressively. She stops.)…Wait. What?

BILL: Scared?! You’re not scared! HA! Your future’s as bright as a little (He tries to find something to say) Bright bean. (To Jane) I’ll bet Kathy’s got some tricks up her sleeves Jane. Can’t you tell? (Bill takes Kathleen’s sleeves and begins to shake them out. He pulls out imaginary and corny documents.) Let’s see…What’s in here…Oh! Looks like business school! Or maybe (shaking some more) Huh! How ‘bout that! It’s a JD! (He slaps her on the back and laughs.) Right Kath!

(The cell phone in Kathleen’s pocket begins to ring. She looks at it but does not answer it.)

JANE: Well Tommy used to have some tricks up his sleeve, didn’t you Tommy? (To Kathleen) Aren’t you going to answer that phone?

JANE: We think Tommy is a…(She looks back to the shadows to speak to Thomas) You know Tommy…I heard someone say the other day that they were an ex-pat and I thought of you. You’re an ex-pat because you just don’t like it here much huh? (She turns to Kathleen) Graduates two years early, on the Dean’s List at the U, Anoka County Service Award two years in a row and and and…One day he just decides that he doesn’t like it here much so now he’s “Mister Ex-Pat.”

THOMAS: (From the shadows) You have to be living in another country to be an ex-pat Mom.

BILL: You can be any kind of ex-pat you wanna be around here but out there? You don’t want to be an ex-pat out there. You don’t know what will happen to you out there…

JANE: (Noticing that Kathleen is still staring at her cell phone.) Someone important?

KATHLEEN: It says. It doesn’t say which one. It says. On my cell phone it says. “Neighbor”. “One missed call from…Neighbor.”

BILL: Never mind. In a few years we’ll get rid of that plastic crap and we’ll all be connected through one big network.

(Bill takes Kathleen’s cell phone and smashes it on the table in an odd little burst of violence. It breaks a bit.)

BILL: Look at that craftsmanship. Total crap craftsmanship from China. (He hands Kathleen her cell phone. It is now damaged.) Here ya go Kath. Don’t even bother with this plastic crap from overseas. Just wait ‘til this country is hooked up on the network…

JANE: (Speaking to Thomas and Anlor) Say! Why are the two of you hiding out there in the foyer? (It is clear that Jane also doesn’t know how to pronounce Anlor’s name. She calls her something that sounds like “Rambo” as well.) Tommy—tell Rambo to come inside

(Thomas enters. He’s a shaggy fellow with glasses and the quintessential vintage gear: big baggy wool sweater and baggy suit pants. He is followed by a skinny, pasty girl wearing tight jeans, cheap sparkly boots and lots of eyes shadow and lipstick. She is probably about fifteen or sixteen.)

JANE: Kathy. This is Rambo.

JANE: She’s suffering from culture shock. Tommy went to show her some of his video games and she thought he was going to shoot her with the plastic rifle.

(Jane laughs. Kathleen pretends to laugh. There is a little pause.)

THOMAS: No she didn’t.

THOMAS: She never thought I was going to shoot her with the plastic rifle.

THOMAS: But she didn’t…

JANE: Well she might have….The agency told us that she was living in some (dividing up syllables for emphasis) pret-ty rou-ough conditions.

(Kathleen walks back and forth from the kitchen area for drinks. Is she onstage? Partly visible?)

BILL: So say…Where are the folks?

KATHLEEN: They should be down any second. Can I get you a drink?

BILL: Oh what do I want. I’ll bet Frank’s still on micro-brew huh?

KATHLEEN: Um. Ya. Or. Some sake? From Chicago?

(Overlap from Jane and Thomas’s conversation)

THOMAS: No Mom. I wouldn’t.

(Bill zeroes in on Kathleen for the dreaded “catching up”)

BILL: So say what’s shakin’ up your tree there Kathy?

BILL: What’s shakin’ up your tree? Are you…?

(In the distance, we can hear Jane speaking to Anlor.)

KATHLEEN: My dad told me he’d send me to Winona but…

KATHLEEN: Mr. Dudley. We used to be pals right?

BILL: Er. You mean. Winona State? That’s a good thing you know. You should get yerself down to Winona State in the fall. Get a degree in Business Admin and go and rock somebody’s world…You know what yer gunna have down there?

BILL: Yer gunna have some rowdy punches down there!

KATHLEEN: (A little pause) I’m. I’m looking forward to that.

BILL: Ambo! Bring Ambo over here! (Trying to speak to Anlor) Kathy here is going to Winona State and I told her that she’s going to have some rowdy punches down there. Rowdy punches is like…You tell her Tommy.

THOMAS: Um. Okay Dad. (He turns to try to explain something to Anlor. He stops.) I don’t know what “rowdy punches” means.