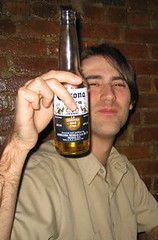 Kip Fagan: Miles Away from Ordinary

A weekly feature in which we inquire just what play a director might stage if space, rights, time, and costs were not at issue.

This week, we introduce Kip Fagan, who came to our attention with his wonderful work on Rachel Hoeffel’s Quail last summer. Kip recently directed Sam Marks’s Nelson for Partial Comfort on Theatre Row, Adam Szymkowicz’s Incendiary at Juilliard, Christopher Durang’s Not a Creature Was Stirring at The Flea, and MORT, a solo play about composer Morton Feldman he created with Nico Vassilakis, at HERE. He’s currently directing Mark Greenfield’s I.E. In Other Words at The Flea.

After the jump, Kip reveals he would direct:

Since Bush took office, I’ve been dreaming of doing Brecht’s A Man’s a Man, and the Iraq war has just added unfortunate luster to that idea. It’s a play about a nice regular guy who has a hard time saying no to anything, so by the end he’s manipulated into being an ultimate fighting machine ready for any war he might be thrown into. A good parable for a time where a carefulness to “support the troops” makes it difficult to state the ridiculousness of a war that everyone knows is ridiculous. Plus it’s funny, with pratfalls and everything.