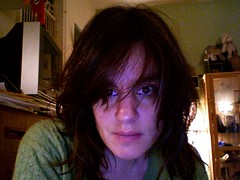 Welcome to the world of reverie and Dali-esque sequence we refer to as Dream Play, in which we ask directors what they might stage were money, space, and rights not an issue.

This week we feature the captivating Pam MacKinnon. Ms. MacKinnon is currently represented at currently running at NYTW John Fugelsang’s All the Wrong Reasons and with Naked Angels through the 22nd Cindy Lou Johnson’s Propaganda. She is in preporduction for a workshop of a new Richard Greenberg play and full productions of plays by Edward Albee and Bruce Norris. Recent productions include the world premiere of Itamar Moses’ The Four of Us at The Old Globe in San Diego as well as his play Bach at Leipzig at NYTW; David Mamet’s Romance at the Goodman; Gina Gionfriddo’s After Ashley at Philadelphia Theatre Co.

Left to her own devices, ms. MacKinnon would direct:

I would stage, run in repertory and tour the world with Thorton Wilder’s Skin of Our Teeth and William Saroyan’s The Time of Your Life. They are such open-hearted-with-the-world-on-the-brink-of-chaos plays, which sing of a sometimes neglected modern American Dream of home, curiosity, freedom, responsibility and simple survival. They are surprisingly musical plays rich in character, bold in structure and at once sublimely funny and entertaining, while also OH. SO. DARK.