I Can See Clearly Now: Cymbeline 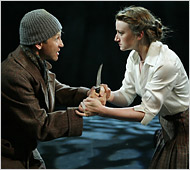 Saw Cymbeline at the Brooklyn Academy of Music last night. While I understand the motivation behind Charles Isherwood’s censure of the show, I do think the production’s worth applauding for its clarity. One of the most famously confusing (even occasionally ridiculous) of Shakespeare’s plays, its plot and tone vary alarmingly. While Declan Donnellan’s direction may not make emotional sense of the astonishing series of revelations at the end, it does at least make logical sense of them.