It’s a Good One: Ruffle Fat 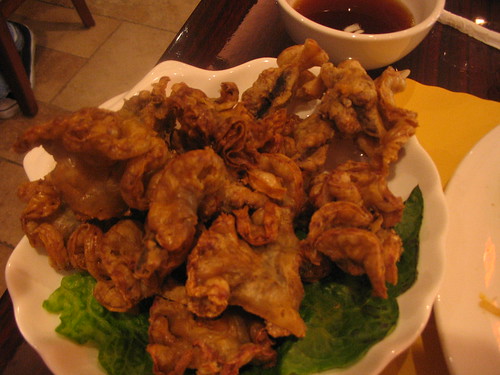 In this fast-paced city of gastronomic gentrification, Filipino restaurants are still places where non-paesano will be met with lots of incredulous looks. “I don’t think you’ll like that,” my very considerate waiter told me when I inquired about the chicharon bulaklak appetizer ($5) at Engeline’s in Woodside, which opened about six weeks ago.

Obviously, I took this as a dare and ordered it. The menu describes it as “deep-fried, crispy ruffle fat.” It does in fact look like a ruffly version of the cracklings I’m more familiar with, but with a slight gamey taste, since bulaklak is made with the fatty part of pork intestines. It’s served with vinegar sauce, and if you didn’t tell a bunch of frat boys what they were eating, this would be a hit at any sports bar.

As I crunched away, four waiters stood around my table in a semi-circle, gawking and saying “you like it?” Yes, I like it!