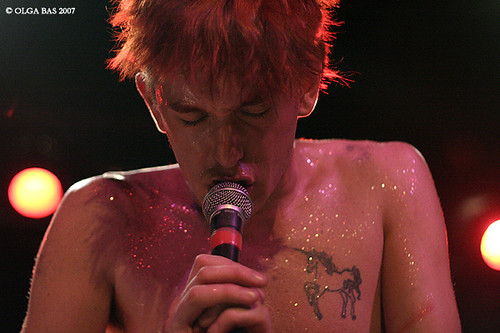 Photo from this guy

Within the first four minutes of Patrick Wolf’s set at the Bowery Ballroom on Wednesday night, he’d played a piano ballad, a short song on a small ukelele-like guitar (accompanied by a fetching, sloe-eyed Irish violist) and was midway through a dance-pop number. By the sixth minute he was on his second hair color (having whipped off a black wig to expose his Ziggy-hued new-wave do), and before the eighth, he’d stripped down to his shorts, shedding his scanty shirt in a shower of red glitter. It was like watching an E-addled, Abba-obsessed 11-year-old bounding around his bedroom with a hairbrush for a mic.

To those expecting a reprise of his onstage hissy fit last month — inspired by a now-former drummer’s fleeting acquaintance with consciousness — Wolf’s performance felt like a lovefest.

The energy leveled off a bit after the first 10 minutes (how could it not?) as Wolf and his four-piece band plowed enthusiastically if a bit unevenly through album tracks and a snippet of “Moon River.” He wielded a theramin, fired off an impressive viola solo and some authoritative piano-playing. There were at least three more costume changes, including a lurid-patterned jumpsuit nearly identical to the one from Bowie’s “Aladdin Sane” tour. Several people were seen leaving hastily early in the set, but the crowd was mostly packed with true believers: The floor shook during the Pulp-like set closer “Magic Position,” and again for the encore “Accident and Emergency,” which found Wolf onstage in red shorts and a skimpy, glittery American-flag vest. He addressed that getup with a comment about how he’d appeared on Conan that afternoon and “I wanted to do my Madonna ‘American Life’ but they wouldn’t let me.”

After interminable fiddling with the laptop, he finished with an acoustic take on Kate Bush’s “Hounds of Love,” concluding a set that was, in lots of ways, a meditation on the ’80s: the melody from “Overture” sounds a lot like Tears for Fears’ “Mad World”; the at-times sprightly viola summons Dexy’s Midnight Runners; and the person Wolf most resembles, for better or worse, is Tom Bailey from the Thompson Twins.

“People like you make me like what I do” was among Wolf’s many gushing comments to the crowd — and for certain members, particularly the several who were clearly dressed in homage to him, the feeling was mutual.

This article from the Village Voice Archive was posted on May 10, 2007