Aurora Soho: Thumb Rings and Bow-Ties Together at Last! 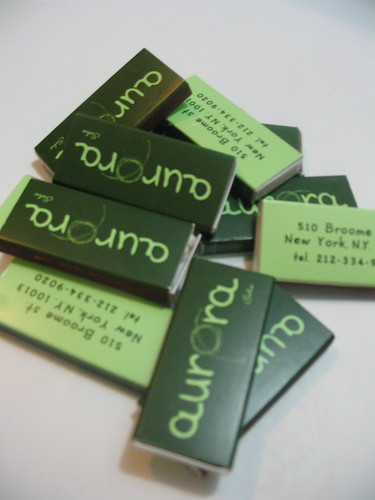 Of course, it’s way too early to judge, but I paid a visit to Aurora Soho last night. Was it wrong to take so many matches? Being a fan of the original Williamsburg location, I was concerned that the laid-back attitude would be lost in Manhattan. The food was good, and I expect it will get a tad better in the coming months. The room is outfitted with the same rugged fixtures and aging wood frames as the original, but the space does seem a little more formal. The Brooklyn restaurant features a garden and a slightly more haphazard layout. Or perhaps it’s just that there are more grown-ups around in Soho, in jackets and everything. (We actually spotted an un-ironic bow-tie!) Happily, our waiter, who had long hair and was wearing a thumb ring, pointed us towards one of the handful of wines under $30 — with no condescension or pity. We like you, Aurora.

And for the record, we had the delicious baby octopus appetizer, the fried artichokes with white beans — which were good but not thrilling, the special ravioli, stuffed with burrata and adorned with wild mushrooms and ramps, and the special roulade of baby goat. The ravioli, like all the pasta and all the bread, is made in-house, and was very good, but the burrata was wasted in this treatment. Being cooked rendered it mealy, almost cottage cheese-esque. The baby goat was close to raw in the center, but otherwise tasty.