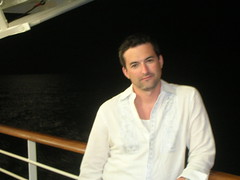 It’s our occasional feature wherein we pillow talk with directors and ask them what shows we dream of directing.This week we feature Michael Kimmel, whom I met nearly a decade ago, during my first month in New York. Since those salad days Mr. Kimmel has directed all over the city. Most recently, Marat/Sade(Access Theater), Shannon in Ambient Light(the Bottle Factory) and the Quantum Eye(The Jewel Box). He is an adjunct faculty member at Fordham University at Lincoln Center.

Left to his own devices, Michael would direct…

There are two shows I’ve always wanted to direct. The first I’ve gotten lucky enough to do- Len Jenkin’s Kraken. I read it 6 years ago, and have obsessed over this play about Melville and Hawthorne- It’s an incredibly moving piece that looks at one night they spent together in Liverpool, England towards the end of their careers, and shows how two of our greatest artists looked back at their work while they contemplate their mortality. And there is a character named Death!! (Kraken is playing all through May at walkerspace)

The other show I’ve always wanted to direct is The Crazy Locomotive. I found Witkacy (Stanislaw Ignacy Witkiewicz) in college while directing The Madman and The Nun, another of his plays. I later went on to read The Crazy Locomotive and fell in love with this short piece about technology run amok. The play is about two engineers on a train that is gaining speed as the play progresses. It is a surreal and visceral experience that makes technology pump with life, while dehumanizing the flesh and blood on it. It is an inherently theatrical piece that I hope to get the chance to do someday.