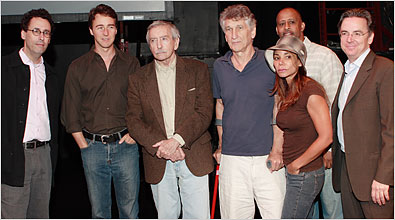 Attended a press conference for the Signature Theatre yesterday–a particularly star-studded one. (Though I suppose that depends on whether or not you consider Tony Kushner a star, I do!) Artistic director James Houghton and invited guests detailed the Signature’s next four seasons. Charles Mee, who will anchor the 2007-2008 season, professed himself “way beyond delighted.” In addition to three of Mee’s plays, the season will conclude with a remount of Edward Albee’s Occupant, which played once at the Signature but never opened on account of star Anne Bancroft’s illness. The next season will pay tribute to the Negro Ensemble Company. The following is devoted to Suzan-Lori Parks and 2010-2011 is given over to Tony Kushner, who introduced himself saying, “I’m not going to talk for very long because I ahve a shrink appointment.”

The presence of Signature supporter Edward Norton was quite exciting, but even more exciting was the announcement that owing in large part to the philanthropic efforts of TimeWarner, for the next four years Signature will be offering all tickets for $20–meaning every ticket is underwritten to the tune of $45. It’s such an impressive and generous move and should set a challenge for other companies and businesses to work to make theater affordable and accessible for all. That’s the sort of initiative I’d happily sign up for.