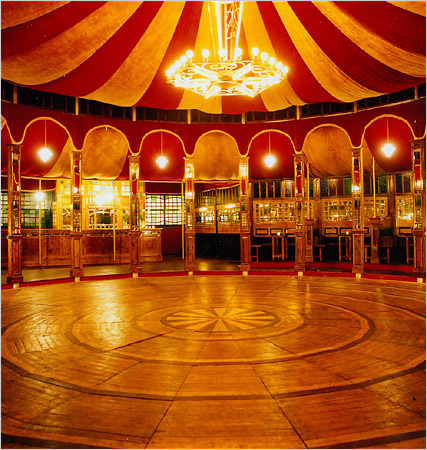 I’m not such a marriage-minded girl, but should my sweetheart and I ever tire of living in sin, I can’t think of a place I’d rather plight my troth–or, at least, throw a super party afterwards–than at the Spiegeltent. This turn-of-the-century traveling extravagance of mahogany, teak, stained glass, and velvet has settled in the South Street Seaport for another summer. It really is a gorgeous space, making any performance therein seem smarter, sexier, more elegant. Producers Ross Mollison and Vallejo Gantner have anchored the season with two circus cabaret shows. Last season’s wonderful Absinthe (featuring some real talents and some men so handsome they might make you or your date a bit uncomfortable). They’ll be joined by a French-Canadian group called Les Sept Doigts de la Main, performing a show called La Vie, which is (somewhat inauspiciously) set in Purgatory.