Fresh Direct on the Lookout for Indian Mangoes 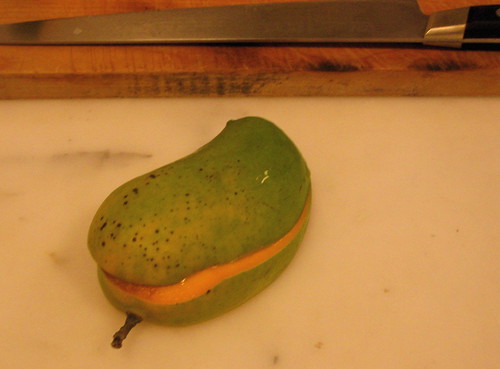 Alphonso mangoes, or “Indian mangoes,” as they’re usually called, became legal imports in time for their spring season, and, as you may recall, a foodie freak-out ensued. Indian-Americans were delirious with nostalgia, and fruit enthusiasts trekked to Jackson Heights to see if the legend could be true. Alphonsos are said to be incredibly sweet and aromatic, and to possess a custard-like, almost fiber-less flesh.

We have to say, the Alphonso is no joke. When we sampled one recently, the flesh was incredibly juicy and tender, and the perfume was almost unbelievable. While Pattel Brothers in Jackson Heights sold the mangoes by the case (12 for $35), Fresh Direct sold about 500 mangoes individually in two weeks. They’re currently trying to get more, but the season may be done for this year. We will keep you posted, readers, in case there are a few left to snatch up.