Summer Squash: We’ve Had it Up to Here 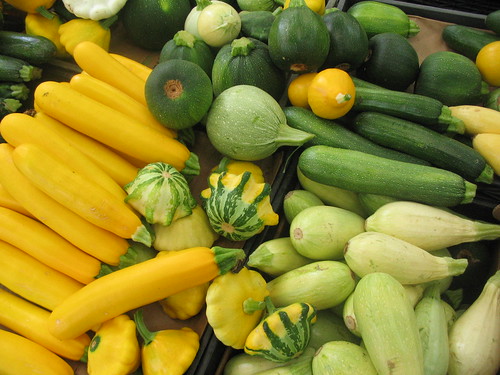 The Time’s Magazine, has an article about expensive summer squash that is in no way different from regular summer squash. Daniel Patterson seems incredulous at first about what he calls “luxury squash,” which he buys in San Francisco for $3.99 per pound.

Acknowledging the stuff as “the most prolific and banal of summer vegetables,” but, applying the logic that if it’s expensive, it must be good, he finds a way to go along with it: “I was disturbed but also intrigued: perhaps familiarity had blinded me to squash’s delicate charms — at these prices it clearly deserved more than a typically bland sauté or a quick turn on the grill.”

The grilled terrine he makes does sound tasty, if incredibly gay, but as a proud CSA member, I have been up to here with summer squash for the past couple of months and I’m not all that charmed. Perhaps it’s my own laziness. Confronted with a few new pounds of summer squash every Tuesday, I’ve taken to chucking them into salads and pasta, making soups with them, or just eating them raw with salt to stave off the guilt of wasting food. They’re like some cousin who comes to visit every summer. She’s nice, there’s nothing wrong with her, but after she leaves you sort of forget she exists until next year.

This article from the Village Voice Archive was posted on August 20, 2007