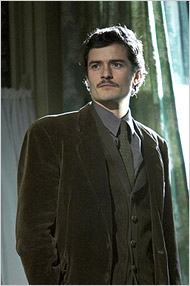 Earlier tonight I mused on the panoply of screen faves destined for Broadway stages this fall. Just read Matt Wolf’s quick post in the Guardian where the expatriate Yank argues that star presence alone won’t revive or sustain a lagging West End box office. Unlike us easily swayed Americans (he cites the sold-out Three Days of Rain), an above-the-critics name won’t send the Brits buying, though it did lure Ben Brantley. Wolf writes:

In London, the play, not the player, is still the thing, especially since you don’t find Judi Dench and Maggie Smith together on stage all that often: their West End duet in David Hare’s Breath of Life looks unlikely to be repeated. In the meantime, Juliette Lewis tanked in “Fool For Love,” Jessica Lange has done less well on each of her three West End engagements, and tickets proved far from impossible to obtain for Daniel Radcliffe in “Equus,” or Orlando Bloom’s ongoing run in “In Celebration”: the anticipated Julia Roberts-style hysteria never quite hit London.

He cites Madonna as one of the few people who could make the English rush the stage door. Are we really so much more susceptible?

This article from the Village Voice Archive was posted on August 21, 2007