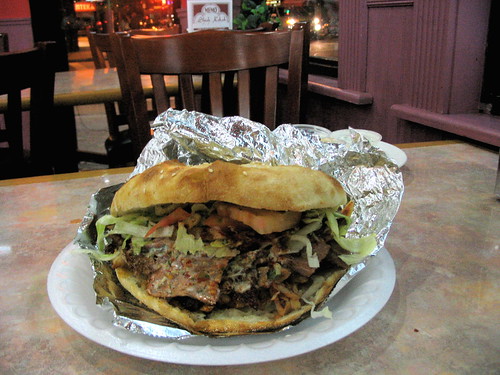 Long before we had any right to think of him as Our Man, we were following Sietsema’s knowledgeable taste buds to the outer reaches of New York with great success. In 2005, Sietsema named Memo, a Turkish/Uzbek sandwich spot in Bensonhurst, number one in his Cheap Chow Now Guide:

Be amazed, be very amazed by the bulging sandwich called “mixed lamb and chicken gyro on home bread,” boasting a bulwark of fresh Uzbek bread, a fortuitous mingling of twirling herbed meats, and finishing dribbles of gritty hot sauce and garlic-laced yogurt. And the baba, tripe soup, and brown-top pudding only increase your delight at this humble Turkish lunch counter.

Let’s talk about the bread for just a minute. Each lamb-happy sandwich comes not on a familiar flat-bread or a pita, but, basically, on its own loaf of dense, chewy lapeshka. The lamb is tender and, in places, charred, and, as a friend put it: “This cooking even makes chicken good,” meaning moist and flavorful rather than the form chicken too-often presents itself.

Memo has expanded recently to occupy the whole corner of Kings Highway and 18th Street, so bring all your friends.

This article from the Village Voice Archive was posted on August 24, 2007