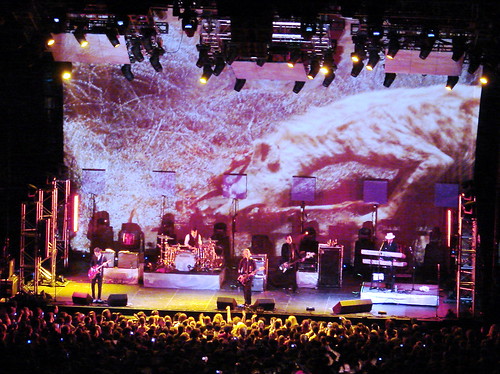 At the Garden on Friday night, Interpol kicked everybody’s asses, playing every song everyone wanted to hear (even “NYC”!).

Unfortunately Chan Marshall (Cat Power) wasn’t much of a lead-in. People swear her shows are getting better, and one wouldn’t think she could have been worse than when she opened for Built To Spill at McCarren Park Pool in July. There, poor acoustics and drunken summer revelers drowned out her vocals, which wasn’t really her fault. Her voice in concert is as heroin-glam as it is on record, so one would think a roofed space with a captive audience would do the trick.

“Start spreading the news….” she sang, her four-piece band making “New York, New York” groovier than Frank did. But Sinatra would have had had better sense than to hop across the stage, Ashlee Simpson-style, or imitate the Saturday Night Live character played by Molly Shannon who’s always kicking her legs out awkwardly and smelling her fingers after they’ve been in her armpits. (That said, Marshall was better than Liars, whose tribal drumming and posturing lead singer drove me quickly back to the upstairs faux-pub for another Guinness.)

In between songs from The Greatest she played Smokey Robinson’s “The Tracks Of My Tears” and “Satisfaction,” briefly parroting Mick Jagger’s ostrich pose. A guy standing near me yelled, “Oh, get off!” As in, get off the stage.

I didn’t see a single person stand up during her set, except to go to the bathroom. All Interpol had to do to bring the crowd to its feet, however, was turn the lights down and drape a giant white scrim across the stage. You could only see their shadows for two songs, making me wonder if they’d gone all arty and high concept all of the sudden. (Or else were pulling an MF Doom.) But it was just a glitch, and eventually stage-hands pulled down the thing.
Though Paul Banks’ vocals are perfectly suited to arena rock, scissor-kicking Daniel Kessler clearly ruled the stage. His lead guitar — pumped waaay up in the mix — anchored nearly every track with thick, bacony plucks.

Our Love To Admire has been maligned as thematically unfocused, cheeky, and too similar to their other albums. All of which I think is bullshit. But even if you’re not feeling the record, it has certainly given the band more arena rockers, and perhaps this was the plan all along. (Kanye West cops to this strategy on Graduation.) And so “The Heinrich Maneuver” drew me towards the front. But flailing bodies littering the aisle’s airspace inhibited my forward progress. Arms pumped and mini moshes ensued like this was a Rage Against the Machine show, and it all intensified for “Evil.” The band clearly recognized this 1-2 punch as the showstoppers; such are the benefits to catching an act in the middle of a worldwide stadium tour.