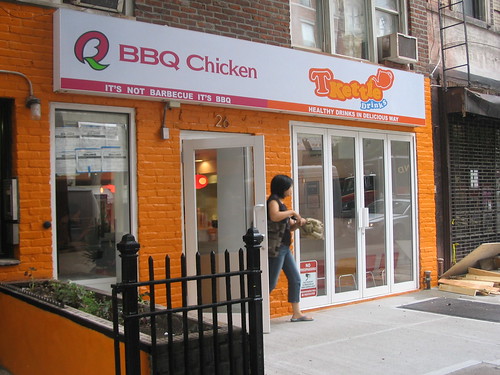 We stopped by BBQ Chicken today, which, according to Grub Street, was supposed to open Friday, but the Korean Chicken operation is still piled with equipment behind the counter. We spoke to the giggly dude behind TKettle’s counter (the two share a space but are separately owned and operated). He told us he didn’t know when BBQ would actually open. “Many times they have said ‘next week’,” he explained. “So, maybe next week? Maybe next year?” We’ll let you know, as the chain is conveniently located near Village Voice HQ. In the meantime, we sampled a $4 coconut milk tea with tapioca balls. It’s true, those balls are fresh and chewy, and the coconut is natural, which is not to say it’s not intensely sweet.