The Hasidim Get a Food Truck 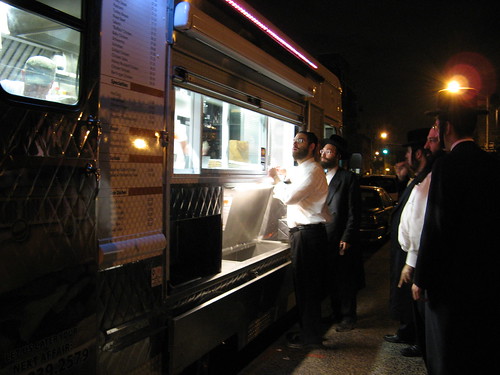 Two months ago, Nathan Lichtenstein launched a business he hopes will become an empire — or a fleet, really. Sub on Wheels is a kosher food truck catering to the Hasidic community in Williamsburg, but which welcomes us all. (Lichtenstein had never heard the term “hipster” before, but cheerfully reported that he gets “all types.”) I discovered it after seeing some friends, the band Rainbowsssss, play their psychedelic/improvisational/ experimental music the other night at Rock Star Bar. Not to get all sentimental or anything, but don’t you love New York?

Lichtenstein, who called me “sweetie,” but who somehow was not creepy, was born and raised in Williamsburg, but settled upstate. He used to own a restaurant in Monsey, New York, where he lives, but closed it two years ago when another guy opened a place down the street with 100 more seats and a very similar menu. Bastard!

To my slight disappointment, Sub on Wheels, which, just before midnight on a Thursday, had a steady stream of customers, doesn’t serve focus particularly on Jewish food, but offers a mix of mainstream favorites, many inspired from other ethnicities, like the beef teriyaki sandwich, the sausage and peppers sub, and even schnitzel(!). For the record, they do have pastrami, chicken noodle soup, knishes, kugel, and an Israeli salad. We went for the popular “mixed grill” sub, at Lichtenstein’s suggestion. It’s one of the more expensive items, at $9.50, but it was about the size of my arm, making it plenty for two people. It was no masterpiece, but a grubby and enjoyable mix of beef, chicken, and grilled vegetables.