Trend Voting: Is it Cool to Wear Fur, Like the Olsen Twins? 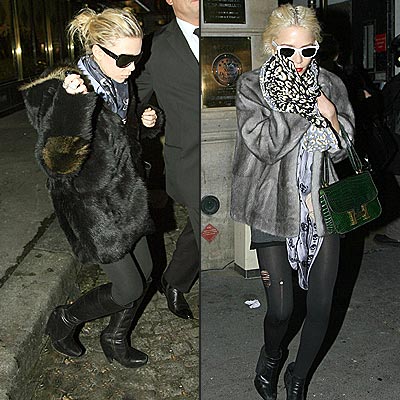 We’ve been toying with the idea of an Olsen-inspired concept for winter. Kind of a disheveled rich girl thing, which would only be complete with a ratty-looking fur jacket/coat/stole. But this is tricky. How do we all feel about this trend—morally, aesthetically, etc.? Is fake fur better than real? Is vintage better than new?

We decided to take a vote, and asked two-dozen fashionable 20- and 30-somethings. The results are below, and they were somewhat surprising. Please add your two cents as well!

“i would wear anything that is dead. my preferred coat choice when going to kate’s joint and/ or yoga.”

“Very Little Edie. I’d go for vintage, and real. The point is that once upon a time, you had all the money in the world…and look at you now.”

“I feel like new fur reminds me of my father’s goom-ba guinea wife whereas vintage fur is classy. I don’t know why this is.”

“I think fur jackets are pretty gross. Not that leather is any better ethically but leather isn’t as in your face as fur. Fake fur doesn’t look or feel very good. If you’re gonna wear fur, vintage is definitely better than new.”

“this is a good winter concept. it requires lots of broken-in leather and underpinnings with sequins.”

“um, ok. vintage is yuck. it’s not like your dear readers can afford good vintage, and vintage from andy’s cheapies or whatever is going to smell like a poisonous old hag. so that’s a no. i’m saying really good faux is good, and really good real is fine if you have the cajones to pull it off. on the other hand, if you do have cajones you should not be wearing fur.”

“Ratty but not really ratty. I like the look of awesome fur with a messy bed head, very MK. I’m all for vintage fur. I’m for REALLY GOOD fake fur…so good it looks super real and is super $$$. Morally I have to say I’m not for new fur but secretly I’m for it. I also think fur is for night time activities. A fur coat at 9am just doesn’t work for me ….unless you are doing the walk of shame and then I love it.”

“Fake fur’s great, but the Olsens aren’t ratting it up enough in those photos. Although one time, my sister had a really ratty fake fur-trimmed coat, and it looked like a giant vag on her. She was not pleased when I brought this up.”

“Look: animals who are furry are cute, there’s no doubt about it. Panda bears, seals, even beavers. They’re adorable! But buying fur is not exactly equivalent to choosing your lobster in the tank at the Chinese restaurant. The mink or whatever (and those are ugly) are long dead. That doesn’t make it right, but I think it makes wearing fur less wrong than some would have you believe. Just because you and your vegan Oberlin-alum friends boycott it, doesn’t mean Russian oil barons and their mistresses are going to.

The reason I vote for vintage over new fur is not political, it’s aesthetic. Unless you’re going to spend $14,000 on a Fendi shrug, anything you find is going to be, frankly, hideous, because it was designed for a target customer with horrible, horrible taste: dentists in St. Louis, mobster wives in Brighton Beach, hip hop artists. You want fur that’s like ‘Oh, I borrowed this from Anna Wintour,’ or ‘Oh, my great grandmother was the Queen of Norway and this was hers.’ For that, you’re going to have to buy something vintage. Then you’re going to have to put on sunglasses that are way too big for your face and buy a Venti iced coffee and there: You’re an Olsen.”

“my ratty fake fur is kind of better because it brings in an element of a loved teddy bear or something.”

“pro. i wear this giant weird vintage fur when i’m ready to be ridiculous. so yeah. it’s already dead. you’re not supporting the industry or whatever, just whichever hipster street vendor/grandma you buy it from. warning, though, old fur smells like, well, old fur.”

“my mom had an old skunk-fur coat and whenever it rained it stank like skunk — until a dog totally attacked the coat at a dinner party and ripped it to shreds. my mom wore a parka home that night.”

“i think fake is better.”

“I think the best fur is one that frames your face and makes you look glam rather than one that hangs there and makes you look like you have on a bathrobe (like ashley pic #3) I had a good one in my riot grrrl phase, too bad I don’t have any pictures. I don’t like new, I think fake is fine, and vintage is better (though smell is indeed a sticking point).