My Favorite Thing To Happen to the Hold Steady This Week: MSNBC.

Sound of the City roots for the home team, so does Impose Magazine‘s Jeremy Krinsley.

The slow excavation of hip-hop’s Golden Age is getting a sure boost this week with a number of occasions including a new book by DJ Disco Wiz, who claims to be the first latino DJ, a position likely to incite a minor word riot between the other dozen or so who wish to secure that throne. As noted last week, the Zulu Nation has been celebrating its 35th anniversary. Also, Big Daddy Kane’s revival comes to B.B. King Blues Club on Friday, EPMD leaked a sampler for an upcoming EP, and perhaps most widely noted, the classic hip-hop docu-flick Wild Style is showing at Film Forum this week, with a bash in Brooklyn tonight with Spank Rock, Busy Bee, Grand Master Caz and Grand Wizard Theodore.

But the Golden Age tributes hasn’t stopped others from moving resolutely forward into the weird, the wonderful, and the utterly, as some might put it, wack. As for wonderful, we thoroughly reviewed the many Obama odes birthed by hip hop in last week’s post, but the seated king of the art form gets a notable mention this week with “History.” And, Jim Jones: The Musical? Or MGMT vs. Jim Jones? Um, wack.

The Hold Steady returned to the headlines this week. Perhaps because Franz Nicolay is going to release a solo album. Or simply because they came through town with Drive By Truckers for a show that failed to deliver the much-anticipated orgiastic release from our eight-year long national nightmare. (On that note, Obama’s win is apparently a minor dilemma for protest singers all over town.) My favorite thing to happen to the Hold Steady this week: MSNBC. 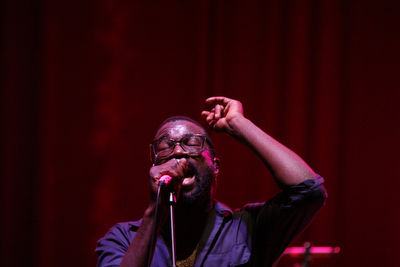 TV on the Radio in Dallas. Photo by Dylan Hollingsworth

TV on the Radio continue their inexorable march through every media outlet that prints words.

In the history of name disputes, this one is pretty classy. Santogold is facing a potential lawsuit from Santo Gold, a former wrestler who went by the name. While this is a dispute that’s been floating for a while, the old wrestler’s been actively misspelling threats on his incredibly awesome website and, perhaps, learning a few HTML tricks along the way.

Rather than burning up in a sudden blaze of glory, Richard Lloyd has chosen the fading-away-over-a-series-of-decades method.

Marnie Stern spent her allowance on a video, and everyone thinks it’s awesome.

The Yeah Yeah Yeahs use CAPSLOCKS in order to reveal their own album details, some become PSYYYYYYYYYYYYCHED!

As Bad Brain’s HR completed another victory lap at Fun Fun Fest, Leftover Crack’s Stza called him out on homophobia.

Joisey’s Titus Andronicus came through town and it somehow felt like they hadn’t played a show here every other day for a year. Maybe because there was a girl onstage with no pants?

Matt and Kim to tour with Cut Copy.

Ninjasonik released a video. So did 88-Keys.