Ahmadinejad: Proud To Be an Unbelievable A-Hole 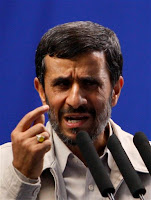 Iranian President Mahmoud Ahmadinejad, who’s still smarting over his loss to Kim Jong Il in the “World’s Cuddliest Psychopathic Dictator” competition, is turning the crazy dial to 11 in preparation for his big trip to New York City this week. Earlier today, from Tehran, the notorious Holocaust denier said he was proud that his views on the murder of six-million Jews — namely, that it never happened — enrages the West.

Ahmadinejad arrives tomorrow to be on hand for the United Nations’ General Assembly. Last week, the New York Helmsley Hotel abruptly canceled an event, scheduled for this Thursday, that he’d be attending. Hotel management released a statement saying that Ahmadinejad wasn’t welcome in any Helmsley facility.

And now, the punchline: Just a few minutes after railing about how good it made him feel to infuriate the “professional killers” of the West, he said he was looking forward to bringing his message of “peace and friendship” to the United Nations.

This article from the Village Voice Archive was posted on September 21, 2009