All the News That’s Fake To Print 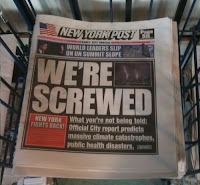 Sherman, set the Way-Back machine to last November, when we awoke one morning to find our fair city flooded with copies of a painstakingly crafted spoof of the New York Times. The prankster activists behind it, the Yes Men, put the fake Times together to call attention to the war in Iraq — and now they’ve struck again.

If you’re lucky, you caught a glimpse this morning of a New York Post headline that screamed, “WE’RE SCREWED.” Although it may not have even raised an eyebrow — this is the Post we’re talking about — a closer inspection reveals that the entire issue deals with global climate change. Admittedly, that’s the kind of thing the Post wouldn’t touch, except to allow the paper’s editorial board to break out its awe-inspiring arsenal of four-letter words and aim it at the liberal menace.

Turns out the whole thing was put together by the Yes Men, and while the newspaper itself is bullshit, the reporting inside isn’t; it’s aimed at getting people to wake up to the very real threat global climate change poses to New York and all of us. The “WE’RE SCREWED” lead story details the findings of the New York City Panel on Climate Change. Another story reveals how average people are doing their part to help the environment. There’s even a “Page Six” featuring supposed gossip about environmentally conscious celebrities (as opposed to the usual vacuous nonsense).

The prank, by the way, is timed to promote two new movies the Yes Men are involved with: The Age of Stupid, and The Yes Men Fix the World. The fake newspapers can probably still be found at various locations around the city — although word has it volunteers handing them out in front of News Corp were detained by cops and had their copies taken away.

If you can’t find any on the street — you can always check it out online.