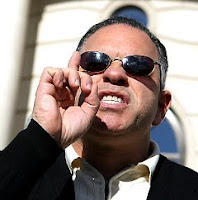 The third time wasn’t the charm — at least not the one the government was looking for — so, alas, Junior Gotti returns today to his home away from home: a Manhattan courthouse. Stop us if you’ve heard this one before, but Gotti’s on trial for racketeering; they’re essentially the same charges he’s faced three times before, with each trial ending in either a hung jury or mistrial.

The difference this time, though, is a set of separate charges Gotti’s facing in connection with two drug murders. Prosecutors say Gotti ordered the killing of George Grosso in 1988 and Bruce Gotterup in 1991, and they’re hoping that the testimony of two new witnesses — a mob turncoat and a rogue NYPD ex-cop — will help hang Gotti once and for all.

Last week we got a preview of what we can probably expect from this trial, when John Gotti Sr.’s widow, Victoria, launched into an angry rant against the judge at her son’s pretrial hearing. She called the feds “little bitches” as opposed to real “men.”

Sure we can make a crack about all this, but we’d rather not wind up spending the rest of our lives bagging groceries somewhere in Arizona under an assumed name.