Montgomery Burns for Mayor: Change We Can Believe In 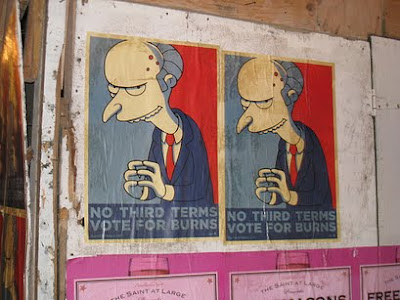 Want to see Staten Island sold to Jersey? A new nuclear power plant in Williamsburg? A “Final Solution” to the hipster infestation? Then vote Burns! Maybe you’ve seen the signs popping up around stalled construction projects locally, but if not, just know that there’s a new really rich white guy in town (how many does that make now?) and he’s gunning for Mayor Bloomberg’s job.

Actually, the satirical candidacy of Montgomery Burns is a direct attack on Bloomberg. It may sound like a farce, but it’s aimed at upending Bloomberg’s push for a third term through sheer grass-roots force.

A “Burns Campaign” spokesman who identified himself as Boris Rasin told NBC that among some of Burns’s more creative ideas for our city is a series of “New Yorker-free Zones for tourists… where tourists can interact with other tourists and won’t have to interact with New Yorkers who may hurt them… This way they can enjoy the ‘Phantom of the Opera’ and S’barro’s discounts in peace.”

Keeping the tourists away from the rest of us? Excellent.