On the Docket: Burress Sentencing 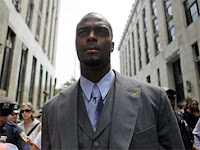 Just a heads-up that Plaxico Burress is scheduled to be sentenced this morning in court — just about a year after accidentally shooting himself in the leg in a Manhattan nightclub.

Thanks to a plea deal, the former Giants wide receiver will get two years in prison followed by two more years of close supervision (to prevent him from stapling his parole forms to his forehead or running over his foot with his own car, one would imagine).

As being unfathomably stupid still isn’t illegal, he should be out in about 20 months.