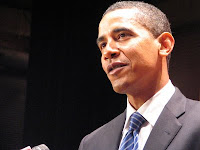 Fresh from giving the Dead-To-Me-Fredo treatment to Governor Paterson (the Daily News’s headline today may as well have said “Piss Off, You!”) and anointing Andrew Cuomo the new golden child of Democratic politics in New York, President Obama has nothing less on his plate today than changing the entire world.

The Times printed his schedule this morning, and there’s hardly a minute to take a breath. He’s already wrapped up a global climate change conference in which he drew sharp contrasts between his illustrious predecessor and himself by, well, giving a crap about the situation. He’s also pushing to get emerging economic powerhouses India and China on board in an urgent push to fight climate change. Tall order, to say the least.

That’s followed by a meeting with Benjamin Netanyahu and Mahmoud Abbas — separately then together. Then lunch with African heads of state and a meeting with Chinese President Hu Jintao.

It all wraps up with the Global Initiative hosted by Bill Clinton — who’s now joined the president in suggesting that Governor Paterson “do the right thing” — and dinner at the United Nations.

If they’re going to shut down traffic all across town, isn’t it good to at least know that it’s probably worth the aggravation.