Sensitivity to 9/11 Finally Over Declares NBC, the History Channel 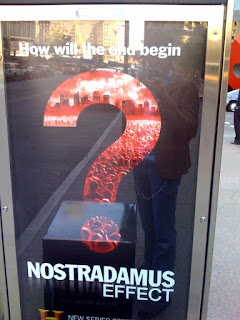 Ever watched a TV newscast and seen a story about, say, a deadly plane crash — and then stood kind of aghast as they cut to a commercial for an airline? Big TV networks employ people whose job is to pay close attention to things like where commercials go in their programming — solely to avoid, you know, the inadvertently tasteless moment just described.

Apparently, the recession has hit NBC, the History Channel and their public ad agencies pretty hard, because they obviously got rid of their “accidentally offensive ad placement” guy or gal. 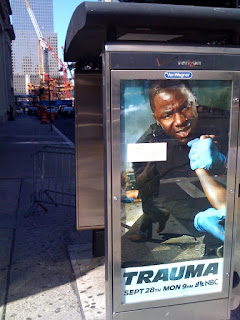 It’s a good thing we’re so desensitized to 9/11 and the exploitation of it that we can now just kind of chuckle at a giant bus shelter ad for NBC’s new first-responder drama Trauma and the History Channel series The Nostradamus Effect which asks, “How will the end begin?” — both placed within spitting distance of Ground Zero.

The Trauma image, with the cranes sticking out of the big hole in the background, is especially delightful, don’t you think?

Oh well. Remember, just a few months ago subway platforms were plastered with ads for The Taking of Pelham 1 2 3.

Then there was this, spotted earlier this year on, of all places, Madison Avenue: 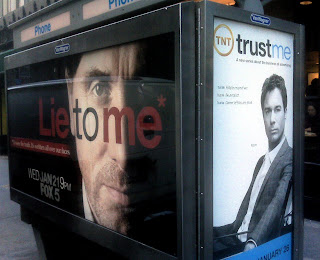