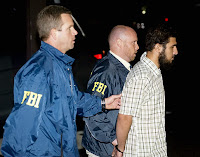 The feds have issued a nationwide terror alert to local law enforcement agencies. It warns that terrorists may be interested in attacking hotels, stadiums and entertainment complexes — or, as one of two official bulletins more colorfully puts it, “blasting and destroying the places of amusement, immorality, and sin.”

This all has to do with the arrest of three men — two in Denver and one in Queens — who the FBI and Homeland Security say were planning a bomb attack. Agents are now expanding their investigation to friends of the plot’s alleged mastermind, Najibullah Zazi, and NYPD detectives have raided chemical and fertilizer companies looking for suspicious purchases, as well as storage facilities in Long Island City.

The two bulletins released earlier today say there’s no specific target or threat — just a general alert. Police Commissioner Ray Kelly says police and MTA security have been increased at key areas in the city’s transit system, but adds that there’s no cause for major concern.

So, there’s that. Plan accordingly.