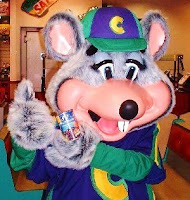 When you think Islamic culture, your mind naturally goes to only one thing: Chuck E. Cheese.

Odd as it may sound, dozens of local Muslim-American families converged on Chuck E. Cheese — home of the entirely terrifying animatronic rodent show — in Brooklyn’s Atlantic Terminal Mall this past Sunday as part of their Eid al-Fitr celebration. In fact, the surprising pilgrimage is actually kind of a tradition, with many saying they hit the same restaurant every year at this time.

Eid marks the end of the Ramadan fast, which probably explains a willingness to eat at Chuck E. Cheese. But first-timer Sarah Ahmed admits that it’s not really about the food anyway. “Most of the Muslims come here because we just like to do something joyful for the kids,” she says.