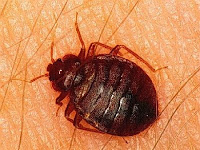 The complete takeover of New York City by bedbugs continues. Eventually these things are going to form their own political party and nominate a candidate for mayor.

The latest victim: John Jay College on the West Side. The school announced just a little while ago that it’s being forced to close one of its buildings because of bedbugs. Although, in the quote of the day, school spokesman Jim Grossman tells the Times that the problem is more a of bedbug “condition” than an actual infestation, because an “infestation is when you can see them swarming.” Thank Christ we cleared that up.

Students were first informed of the vermin problem in an email last night. The building in question isn’t a dorm but an administrative office and classroom facility. All classes are being moved to a different area for the time being. John Jay officials are hoping to bring in the exterminators over the next few days and have the building back open by Tuesday.

We don’t need to tell you that the past few years has seen near-epidemic bedbug “conditions” in New York City — even leading to the creation of a bedbug task force by city officials. None of it seems to have put a dent in the little bloodsuckers’ plans for citywide domination.

But if it makes you feel any better, it could probably be worse.