Sting Trick 2: The Wrath of ACORN 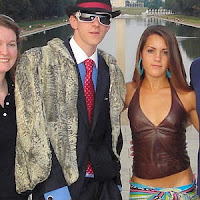 A couple of days ago, the Voice broke the story of how conservative Facebook investor and billionaire Peter Thiel had helped to fund the creator of the recent undercover videos that targeted ACORN. James O’Keefe claims to be “absolutely independent,” receiving no outside funding for his guerilla filmmaking endeavors. But we learned that O’Keefe’s earlier videos were paid for in part with a $30,000 grant from Thiel. (Thiel’s spokesman says it was more like ten grand.)

Regardless, it makes you wonder who’ll almost surely be coming to the financial rescue now that O’Keefe and his anti-ACORN shooting partner, Hannah Giles — who played the prostitute to O’Keefe’s pimp in the highly publicized video — are being sued by ACORN.

Yesterday afternoon, the left-leaning community advocacy group filed a lawsuit against O’Keefe and Giles in Maryland claiming that the audio portion of the filmmakers’ “sting” was obtained illegally because the state requires two-party consent to record conversations.

ACORN is asking for $500-thousand in damages for each of the two employees targeted in the videos, claiming that they suffered “extreme emotional distress.” This, even though they were both immediately fired by the organization for being caught on camera telling an alleged pimp and prostitute how to game the system (or at least being stupid enough to fall for a couple of silver spoon-fed white college kids’ ridiculous get-ups). ACORN also wants a cool million in damages.