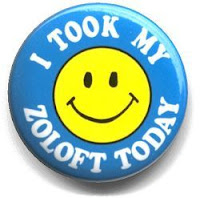 Most of us already know what happens when we stop taking our anti-depressants: We wind up sitting in our pajamas and crying at the television for hours because Roma Torre just looks so heartbroken.

That’s somewhat harmless, but from Nassau County comes another reason why we should never get off our meds to begin with. Yesterday, a court found 39-year-old Brendon Hampson guilty of beating up his girlfriend three years ago. What it ignored in the process was Hampson’s defense that the reason for the violence was that he’d recently stopped taking Zoloft and the withdrawal had made him, well, edgy.

Hampson broke his 28-year-old girlfriend’s eye socket in the attack, as well as injuring her skull, neck and back. He now faces up to a year in prison.

By the way, drug-maker Pfizer warns about possible suicidal behavior while on Zoloft but claims it won’t make you want to hurt anybody else.