House Approves Unemployment Benefits Extension, Bill Now in the Hands of More People Who Have Jobs 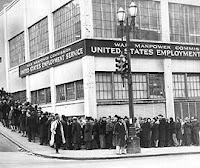 Still unemployed? Afraid you and your family will soon be eating Alpo out of a cardboard box under the BQE? Well the House has done you a favor, now it’s up to the notoriously molasses-like Senate.

Earlier this week we told you that the U.S. House was getting ready to vote on extending emergency unemployment benefits in states where the jobless rate’s still above 8.5-percent. We’re at a 26-year high of 9-percent — with New York City coming it at a whopping 10.3-percent. Well, the House did indeed vote to extend benefits to the unemployed by 13-weeks.

Labor commissioners from 18 states, some of whom are meeting at the National Association of State Workforce Agencies in Niagara Falls, are chiming in and pushing for the Senate to now pass the measure quickly. But they’d also like to see states with jobless rates below 8.5 get help as well.

Just how rough is it out there? New government data shows that six people are competing for every one job opening.

This article from the Village Voice Archive was posted on September 25, 2009