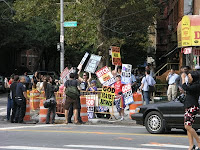 So whatever became of yesterday’s scheduled Rumble in Brooklyn between the batshit lunatics of Kansas’s Westboro Baptist Church and, well, everybody else?

You’ll remember, as we told you yesterday, those nice folks who disrupt soldiers’ funerals with signs about God hating fags were all pumped to protest the Jewish New Year and Brooklyn’s general godlessness in front of Brooklyn Tech High School yesterday afternoon — that, according to their website. But apparently the expected counter-protest of sane folk arrived right on time to find — nothing.

Nathan at Polybloggimous documents what happened next via a series of maps and pictures he snapped. It can’t really be confirmed whether these clowns actually did get lost, but one thing’s for sure: They wound up in the wrong place at the wrong time.

Also not surprisingly, there were only about six of them.

Remember, tomorrow the dingbat roadshow continues at Congregation Beth Elohim and Union Temple in Park Slope and the Kane Street Synogogue — or at least somewhere within a six block radius of these locations. At some point.