Subway Renovations: Light at the End of the Tunnel 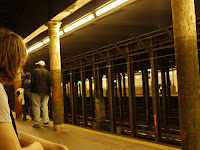 Some of the city’s most neglected Subway stops are going to finally get a little attention.

The MTA just voted to spend $28-billion on various transit projects — among which are a second LIRR track and parking help at congested stations. But what will make a lot of commuters’ day is news that a few of our filthiest train stations will be getting some much-needed renovating.

They include seven stations along the F and M lines, six on the A, L and 3 lines — all in Brooklyn and Queens — and four N and W stops in Astoria specifically. The Grand Street stop on the B and D lines in Manhattan will also be included. The upgrades will mean that stairs and ceilings will be fixed and aging platforms will be redone — all at a cost of about $650-million.

The MTA’s plan will unfold slowly over the next five years.