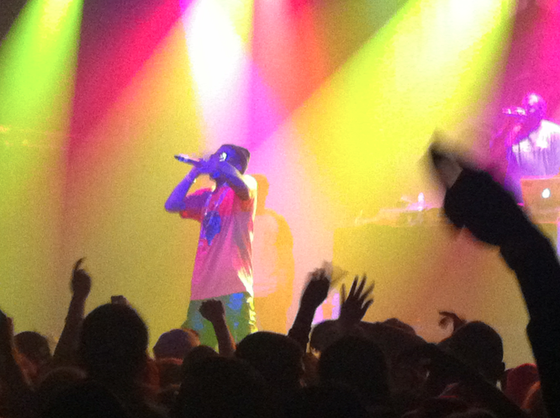 These days, it seems that Juicy J’s renaissance is having a renaissance. With his group Three 6 Mafia stagnating, the man born Jordan Michael Houston took a single rap line–“You say no to drugs, Juicy J can’t”–and turned it into a mantra, a veritable cottage industry. Juicy J took that well-earned Oscar and transformed into half unhinged hip-hop id, half apostle of turning up, tuning in, and dropping out. These days, he’s got a Top 40 hit in “Bands a Make Her Dance,” is signed to Wiz Khalifa’s Taylor Gang, just landed on the cover of The FADER, and is pretty much going for broke with this whole “We Trippy Mane” thing, playing the role of mainstream rap’s drunk uncle that we all love, but are secretly worried isn’t going to make it to retirement age. What I’m trying to say, I guess, is that Juicy J’s merch table was selling souvenir Styrofoam cups, and the bar was selling nutcrackers for $5 a pop.

Of course, there has always been a distinct whiff of ridiculousness to everything Three 6 Mafia did, from the cartoonish death-chants of their early days to the beautifully absurd juxtaposition of music and lyrics in “Pussy Got Ya Hooked” to the fucking VH1 reality show that the group starred in (shouts out to Sugafoot forever, though). But while Three 6 Mafia are some of the chief architects of latter-day hip-hop on the underground, overground, and Internet-ground, Juicy J seems primarily concerned these days with getting fucked the fuck up, or at least commanding others to like some sort of rap Hold Steady.

Taking the stage to an audience-wide chant of, “TURN UP,” repeated with the sort of cadence usually reserved for frat dudes mindlessly compelling each other to shotgun beers, Juicy immediately proved the real reason why he’s had such a strong comeback: you can sing along to basically any Juicy J song, regardless of whether or not you know the words. He’s reduced himself to catchphrase rap about sex, drugs, and rap music, all chanted in a half-mumble that’s easily mimicked. Even if you don’t know what Juicy is actually saying, he’s still probably going to say the words “trippy,” “turn up,” and “SHUTTHAFUCKAHHHHHP!!!” and that’s good enough for most people. In his second era, Juicy J seemed genuinely surprised and even downright touched that people even knew that he was in Three 6 Mafia, underselling “Stay Fly” by introducing it as if he thought it were a deep cut, and taking such classics as “Slob on My Knob” and “Sippin’ On Some Sizzurp” and only playing their hooks, which bolsters my theory that Juicy J is now catchphrase rap to the fullest.

For all his blustery talk of intoxication, it became quickly evident that Juicy J wasn’t that fucked up. He performed with a precision that reminded you he’s been doing this for longer than some of the audience had been alive, and he hid his (presumably too lucid-looking) eyes behind a pair of those big, bug-eyed sunglasses you can buy at a Duane Reade that are usually only worn by old people who want some sunglasses to wear over their regular glasses.

Not that there weren’t a few surprises up Juicy J’s sleeve. He brought a young woman onstage for “One of Those Nights,” his collaboration with The Weeknd, and they proceeded to make out for most of the song. On the other hand, when the song was over, he sent her backstage, which implies she might have been a plant.

With any event that partially hinged upon weird vibes, the implication of total intoxication, and the rabid, sometimes threatening, unfocused male energy that comes along with rap shows, there was bound to be some truly reprehensible shit that went down. It was about four minutes in when some random white dude behind me yelled, “Get trippy, n–ga!!!” at Juicy J for no reason other than he thought it was funny. No one did anything; he was just another random voice in the crowd. As was the second person I noticed do something similar. And the third. And so on and so forth. This whole trend of white dudes dropping the n-bomb came to a head when Juicy J called for someone to get onstage and rap, eventually settling on a goofily large, shirtless white dude who claimed to be from Westchester (strike one), and proceeded to rap what must have been a pre-planned freestyle to Drake’s “Started from the Bottom” that included the phrase, “My n–ga Juicy J” (strikes two, three, four, five, etc.). To the audience’s credit, they actually booed whoever that dickbag was, but it did little to dispel the odd, odd energy at the show.

It’s not like rap shows or rap music in general inherently foster this energy or that the performers are making music specifically for douchebags or that rap shows are attended by uniformly horrible people. But it is a distinct, specific phenomenon that occurs whenever you get a large group of dudes together in a room and have them watch rap music. It’s like their anonymity as part of a crowd allows them to slip into the guise of whatever they want, and unfortunately, some people conflate across-the-board sexism and racism passed off as irony with rap shows and do or say shit they’d never do or say in public, ever. It’s terrible, and needs to stop.

While the audience was an exercise in uncontrollable chaos, Juicy’s onstage brand of chaos was certainly a much, much more controlled one. It’s telling that the show ended before 10:45. Offer the audience an escape from reality, yes. But make sure they’re able to show up for work the next morning.

Critical Bias: Some dude tried to grab my friend’s ass and she tried to punch him; if you did that and you’re reading this, you should know you’re a fuckhead and she’s searching for you with intent to destroy every fiber of your being.

Random Notebook Dump: I missed A$AP Ferg’s opening set, but apparently it was good and A$AP Rocky came out.

The Kanye You Once Loved Is Dead and Gone
Sorry, But Kanye Is the GOAT
Frank Ocean Is Boring: The Year Lifeless Music Found Critical Praise