Musto fills us in on what’s best to see on the boards this fall and what to avoid like … well, a plague

Broadway’s coming back! And while the Great White Way hasn’t exactly turned into the Great Black Way, it’s getting closer, since many of the shows being mounted make it clear that Broadway got a lot more woke while it was sleeping. Just like a lot of magazine editors suddenly started scrambling for Black cover subjects under pressure last year, Broadway has realized that it’s been underrepresenting anyone who isn’t white for a long, long time. And that makes us wonder: You mean, all these years, they could have done more shows by, with, and for Black people?

Another change is that abusive producer Scott Rudin is out of the game, having backed down when it was revealed that he routinely did things like clobbering an underling with a computer monitor, flinging a potato at another employee, and throwing a laptop out a window before tossing himself out of producing. It’s no doubt a good thing that the revival of The Music Man — about an annoyingly persuasive con man — is now produced by someone else.

As for other shows, Springsteen on Broadway is already back, and many other hits are returning, including Hamilton, Dear Evan Hansen, Jagged Little Pill, and Moulin Rouge! The Musical (without star Karen Olivo, who announced that she was quitting because of the industry silence surrounding Rudin’s behavior. She now seems like a blazing hero). But we’re also seeing a slate of new entries, some in motion before the pandemic and others recently concocted. And what it all proves to me is that we really couldn’t live without the arts — we simply managed to find other ways to enjoy them (online readings and shows) while waiting it out. And now it’s live again. And I’m there again. In hopes that enough pliable tourists come in to make Broadway profitable again — until October 31, patrons will be required to be vaxxed and masked in the theater—here are some of the heady highlights for the rest of the year.

PASS OVER (previews started August 4, opened August 22)
In Antoinette Chinonye Nwandu’s Lortel Award–winning play — already filmed by Spike Lee — two Black males stand on a corner and pass the time with rough but hopeful small talk, always vigilant for potentially lethal police not too far away. And then a white stranger comes along and shakes things up. Is he Godot? I guess you’ll have to wait and see.

SIX (previews start September 16, opens October 3)
This British musical take on the six wives of Henry VIII was all set to open and get reviewed in March ’20, but lockdown approached as dramatically as Anne Boleyn’s beheading. Well, it’s back, like a rehabbed pop star. The show reimagines the wives as attitudey, modern-day music divas who at one point in time become “all the single ladies.”

CHICKEN & BISCUITS (previews start September 23, opens October 10)
Norm Lewis and Michael Urie star in Douglas Lyons’s “raucous family comedy,” in which a big family secret is unveiled at Dad’s funeral. The result is being sold as feel-good, but I might like it anyway.

IS THIS A ROOM and DANA H
Two works that use real-life dialogue — both of which were produced at off-Broadway’s Vineyard Theatre — will play in repertory at the Lyceum. The alternating docudramas are Tina Satter’s Is This A Room, using the actual transcript of the FBI interrogating info leaker Reality Winner, played by Emily Davis (previews start September 24, opens October 1), and Dana H., in which Deidre O’Connell lip-synchs tapes of the real-life mother of playwright Lucas Hnath, as she discusses having been held captive by a crazed criminal (previews start October 1, opens October 17). Whatever the critics say, they definitely won’t gripe, “The dialogue just doesn’t sound convincing.”

CAROLINE, OR CHANGE (previews start October 8, opens October 27)
The 1963-set Tony Kushner/Jeanine Tesori musical about a Black maid working for a Jewish family in Louisiana gets another go-’round in a production that won accolades in London. (That faraway city has clearly become “the road.”) Sharon D. Clarke stars as the woman who finds some coins, along with some cultural rift, leading to a truly diverse experience in which the bus, the washing machine, and the moon are all given voices.

DIANA (previews start November 2, opens November 17)
Are you simply jonesing to see actors playing Princess Diana, Prince Charles, Queen Elizabeth, and Camilla Parker Bowles burst into song? Are you positively dying for numbers like “Only the Monarchy Is on the Line” and “Here Comes James Hewitt”? See you there.

TROUBLE IN MIND (previews start October 29, opens November 18)
Alice Childress’s 1955 play about theater finally gets to shine on Broadway. It centers on a Black actress who’s tired of playing maids and who is relieved to appear in a play that tackles racism. But as the rehearsal process carries out, it becomes clear that racism exists outside the bounds of the play she’s preparing for. Trouble in Mind was announced for Broadway in 1957, but that didn’t happen. It seems perfect for now, as a mirror to our tumultuous era of three-steps-forward, two-steps-back. Tony winner LaChanze stars.

MRS. DOUBTFIRE (previews start October 21, opens December 5)
A straight guy dons drag, and naturally, Broadway loves the idea! But this one also has gays helping him with makeup and accessories. Based on the 1993 Robin Williams film comedy, the musical stars Broadway stalwart Rob McClure as the unemployed actor who transforms into a Scottish nanny in order to stay close to his kids. As with Tootsie, he—everybody now—becomes a better person in the process.

CLYDE’S (previews start November 3, opens November 22)
Pulitzer winner Lynn Nottage wrote this dramedy set at a truck-stop sandwich shop, where the ex-con staffers are aiming to create the perfect sandwich while also making their lives more nutritious. It’s one of seven Broadway-bound plays by Black writers for ’21. Again: You mean, all these years.…?

FLYING OVER SUNSET (previews start November 11, opens December 13)
Ever wonder what a fictional meeting between LSD-takers Aldous Huxley, Clare Booth Luce, and Cary Grant would be like? No? Then you haven’t done enough LSD. But creators Tom Kitt, Michael Korie, and James Lapine have managed to spin this premise into a musical, and without the help of hallucinogens. I’m hoping for some acid wit on display.

COMPANY (previews start November 15, opens December 9)
Phone rings, door chimes, in comes the gender-realigned version of Company, the 1970 Stephen Sondheim–scored musical about a single New Yorker’s road to realizing that “alone is alone, not alive.” In this version of the anecdotal show, Bobby is now Bobbie (played by The Band’s Visit Tony winner Katrina Lenk), though Joanne is still Joanne, with Patti LuPone doing the honors of ragging on “the dinosaurs surviving the crunch.” I’ll drink to that.

SKELETON CREW (previews start Dec 21, opens January 12, 2022)
This is the third in Dominique Morisseau’s “Detroit Project” cycle, which explores Motor City’s complex sociopolitical history. Skeleton Crew is set at a car factory on the verge of foreclosure, which forces the workers to question loyalties and evolve for survival. I look forward to seeing if there are parallels between this and Lynn Nottage’s 2015 working-class drama, Sweat—or even with her new play, Clyde’s. Ruben Santiago-Hudson (yes, him again) directs, and one of the stars is Phylicia Rashad, whom we can never get enough of — as an actor. But if you’re offended by her eye-popping tweet celebrating Bill Cosby’s prison release (followed by a clarification, stating that she cares about rape victims), then wait till you read the next item.

MJ THE MUSICAL (previews start December 6, opens February 1, 2022)
The aforementioned Lynn Nottage has written the script of this jukebox show about the young Michael Jackson’s creative process. Producers have obviously done their research and figured they can make cash off this piece because it deals with the pre–“Jesus juice” years, and besides, some ticket buyers think Michael is innocent or don’t care either way, they just appreciate him as an artist. But I know a lot of “P.Y.T.’s” who will not be purchasing a ticket, thank you. And I’m personally not thrilled, nor will I be rooting for there to be a musical about O. J. Simpson’s triumphant early years in football.

THE MUSIC MAN (previews start December 20, opens February 10, 2022)
No, it’s not true that this revival has been percolating so long that they’re changing Marian the Librarian’s little brother to her son. Age is irrelevant in the illusory world of the theater. Besides, Hugh Jackman and Sutton Foster are high-wattage stars, and the very white story of a man who drums up fake “trouble in River City” for his own personal gain is more relevant than ever. What’s more, I’m looking forward to debates over whether the song “Shipoopi” — with lyrics like “Squeeze her once, when she isn’t lookin’ ” — is all shipoopied out. 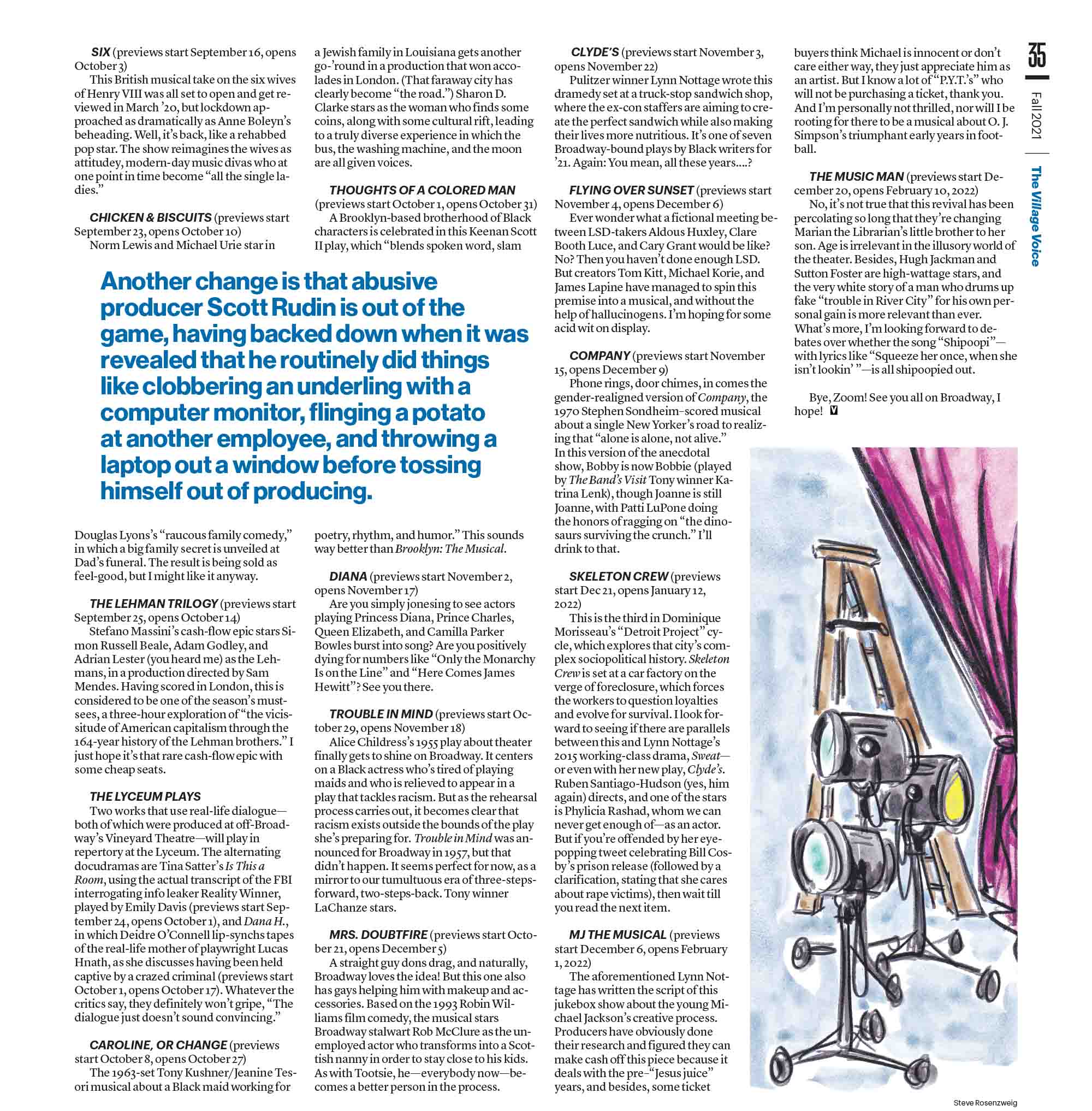